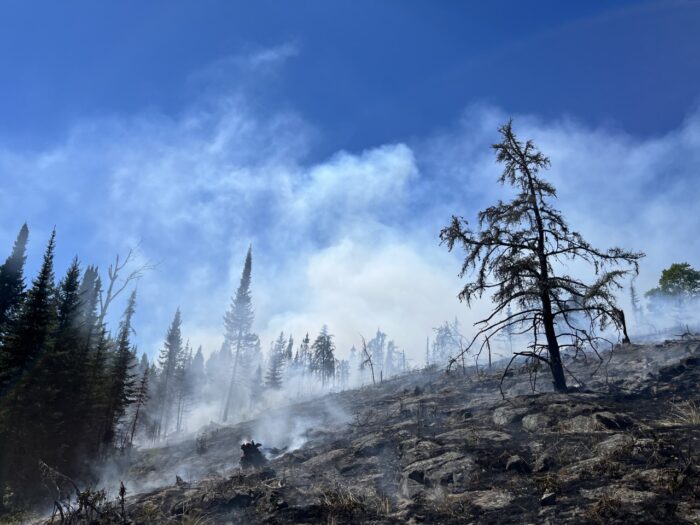 Early in the afternoon on Saturday, August 13, National Park Service staff received reports of a plume of smoke coming from an apparent wildfire burning in the area of Three Mile campground.  Isle Royale firefighters responded to the area and discovered a small fire burning at the junction of the Tobin Harbor trail and Mt. Franklin trail.  The initial assessment measured the fire at approximately five acres.

Visitors were evacuated from Three Mile campground and Lane Cove campground.  Visitors were also contacted and brought in from the Rock Harbor, Tobin Harbor, Mt. Franklin, and Greenstone Ridge trails for their safety. Those areas are now closed to hikers and campers.

Later in the day, the fire grew to approximately 10 acres.  To help prevent further spread until a fire crew could be brought in to work on the fire, a single engine air tanker from Minnesota dropped five loads of water (approximately 4,000 gallons) on the fire late in the afternoon.  Additional fire resources are expected to arrive in the park today, August 14.

Park staff are working closely with the Rock Harbor Lodge, Isle Royale Queen IV, and Voyageur II to provide visitor transportation and fire information while the closures are in place.

The cause of the fire is under investigation.  In the announcement of the fire, the Park Service says information from park visitors is often helpful to investigators. If you were in the area of Three Mile trail and campground, Tobin Harbor trail, or Mount Franklin trail on August 12 or 13, or if you have information that could help, the Park Service asks you to share that information.. Tips may be submitted anonymously. Information may be shared by calling or texting the tip line: 888-653-0009.

The fire status will be continually evaluated. Closed areas will be signed where possible and monitored to ensure compliance. These closures will remain in place until rescinded.

Additional information will be added to the park website and on Isle Royale social media as it becomes available.

Isle Royale National Park announced a press release on August 16. Over the past two days, favorable weather conditions slowed the spread of the Mt. Franklin Fire, allowing firefighters to lay hose line around the fire’s perimeter. While significant progress suppressing the fire has occurred, the fire is not yet considered contained. The current fire acreage is estimated at 6 acres, reduced from initial estimates of 11 acres. Initial estimates are based on first-responder reports and are often adjusted as firefighters respond. There are currently minimal impacts to visitors with the exception of closures, and fire managers expect that to continue over the next few days.

As fire conditions have improved, some closures have been lifted. Most significantly, the Rock Harbor Trail between Daisy Farm Campground and Rock Harbor is now open, allowing for continuous trail access between eastern and western areas of Isle Royale. Three Mile Campground has re-opened and Lane Cove Campground is open to water access, though the Lane Cove Trail remains closed.

An investigation regarding the cause of the fire is ongoing. Investigators are seeking information about an illegal fire and associated camp on the Mount Franklin Trail the evening of August 12 and into the morning of August 13. If you have information that could help, please submit a tip. You don’t have to tell us who you are, but please tell us what you know:

The fire status will be continually evaluated. Closed areas will be signed where possible and monitored to ensure compliance. These closures will remain in place until rescinded.  Additional information will be added to the park website, Mt Franklin Fire 2022 – Isle Royale National Park, and on social media when it becomes available.