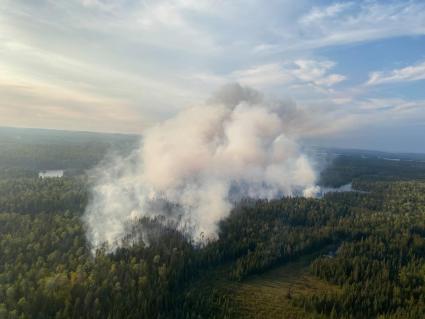 More wildfire news from the WTIP listening area, as Isle Royale National Park is experiencing a wildfire on the island’s east end.

Known as the Horne Fire, National Park officials said Sunday afternoon the fire was approximately 200 acres. The fire is located near the shore of Duncan Bay. The cause of the fire was lightning, according to park officials.

Due to the progress of the fire, ongoing drought conditions and elevated levels of fire danger, area closures are necessary to maintain public health and safety, the park service said.

Included in the closure area is a section of the popular Greenstone Ridge Trail, Duncan Narrows, Lane Cove Trail and Campground and more. Click here to see the full list of current closures at Isle Royale.

In more wildfire news from the region, one day after the U.S. Forest Service announced a complete closure of the Boundary Waters Canoe Area, the Ek Fire (previously referenced as the ‘Elk Fire’) was downgraded in size Sunday afternoon. The fire is now listed as approximately 725 acres. It was estimated to be more than double that size Saturday. It was downgraded due to more accurate mapping from aerial flights that were done Sunday morning, according to the Forest Service. Fire-suppressing aircraft continue to drop water on the Ek Fire to try to limit its spread.

The Greenwood Fire near Isabella was also downgraded in size with more accurate readings able to take place due to cooler temperatures and calmer winds, including the use of infrared mapping. The Greenwood Fire is now listed as 8,862 acres. Smoke from the Greenwood Fire was thick along Highway 61 Sunday afternoon, particularly near the junction with Highway 1 and in the Silver Bay area.

A town hall style meeting was held Sunday night at the Mid Gunflint Trail Fire Hall. More than 100 people turned up for the event to learn about fires in the BWCA and the closure. WTIP will be reporting in the coming days about the meeting and the Forest Service’s plans when it comes to the closure of the Boundary Waters. Other topics discussed during the meeting focused on evacuation plans for the Gunflint Trail community should a wildfire spread outside the wilderness.