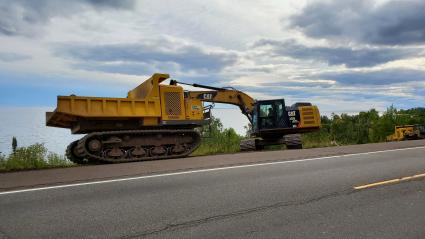 It is now spring and the thoughts of many are on hiking and biking. Some are eagerly awaiting the opening of the latest section of the Gitchi Gami State Trail, from the outskirts of Grand Marais to the Cutface Creek Wayside Rest.

In the past, WTIP has reported on the work toward completion of the Gitchi-Gami State Trail, which will eventually be an 89-mile non-motorized, paved recreational trail between Two Harbors and Grand Marais, Minnesota, along Lake Superior’s beautiful and historic North Shore.

In 2020, work began on this latest 3.4-mile section of trail. This section includes the Fall River, the site of some controversy, as there are some who did not want the Minnesota Department of Natural Resources to construct a bridge at the DNR’s preferred site. In October 2018, the DNR announced it would proceed with the bridge as proposed. Last fall Red Stone Construction of Mora, Minnesota installed the bridge.

The remaining trail work is being completed by KGM Contractors of Angora, Minnesota. They will return to work on the nearly completed trail sometime in April, depending on the weather. Some grading work needs to be done and then the bike/walking path will be paved.

It is hoped that the trail will be complete and open to the public by mid-July.