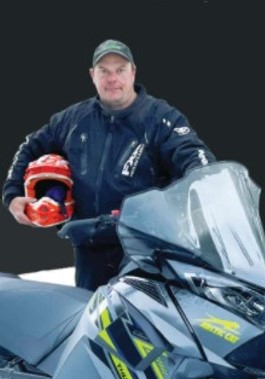 Devil Track Lake in Grand Marais has long been the location of snowmobile drag races sponsored by the Cook County RidgeRiders Snowmobile Club. In March 2022, the local lake will be the site of a major snowmobiling event, an attempt to break the world’s record for a single snowmobiler riding nearly 2,000 miles in under 24 hours.

The rider making this attempt is Willie Ewing of Becker, Minnesota. He is a retired professional snowmobile and ATV racer and a stunt pilot who built his own plane. He is a certified snowmobile technician and he owns The Shock Shop in Becker.

WTIP reached out to Ewing with a number of questions—first, why Devil Track Lake in Cook County? Ewing explains that it is because Devil Track Lake is long and allows for a five-mile track on the ice. It also has less traffic than lakes in the Becker area.

The world record attempt will take place starting at noon on March 8, 2022. Ewing will have a crew of about 15 people assisting him. The Cook County RidgeRiders snowmobile club will provide grooming for the track.

To break the world record, Ewing will have to drive at speeds of 80-100 miles per hour throughout the event. That is greatly in access of the normal snowmobile traffic speeds, so he has obtained authorization from the Minnesota Department of Natural Resources, which waived the speed limit for the day, just for the event.

To travel at that high speed, it seems that the snowmobile used must be loud, but Ewing said it is not. He said the machine he is using is a factory stock-produced four-stroke snowmobile that passes all current snowmobile emission standards. He said it will likely be quieter than many of the machines that travel the snowmobile trail across Devil Track Lake every day. He told WTIP the machine is as fuel-efficient as it can be.

Aside from being an extreme sports enthusiast, WTIP asked Ewing why he decided to try to break this world record. Ewing said for several reasons. One, he said, to bring the world record back to the United States. The current record for the greatest distance by a single rider is held by Nicholas Musters in Lake of Bays, Ontario. In March 2011, Musters rode for 3,069.12 kilometers (1,907.06 miles).

Ewing said he also taking on the challenge to honor a cousin who was tragically killed in a non-snowmobile accident. His cousin wanted to break the world record, so Ewing is taking it on. The third reason, explained Ewing, is the event is a fundraiser. Proceeds from the event will be used to help kids go to summer Bible camps.

To learn more about Willie Ewing and his upcoming world record attempt, visit his website.

WTIP’s Rhonda Silence spoke with Ewing about the March event. Here’s their conversation.