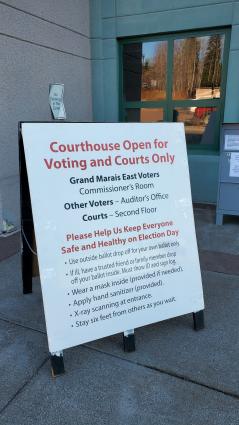 The polls opened at 7 a.m. on Election Day in Grand Marais. They will remain open until 8 p.m.

As of Nov. 2, there were 976 registered voters in Grand Marais, according to information sent to WTIP from the Cook County Auditor’s Office.

Throughout the county, Powers said there were 3,773 total ballots sent to registered voters in Cook County this year. Of those, 3,163 were returned by 5 p.m. Nov. 2. That’s about 84 percent returned overall, including all mail ballots and the absentee ballots in Grand Marais, Powers noted.

WTIP’s Rhonda Silence visited the polling places on Election Day 2020. She spoke with News Director Joe Friedrichs about the local Election Day scene in Grand Marais. Listen to the audio below to learn more.

Note: Tune into WTIP starting at 8 p.m. on election night for live updates focused on the local races, including for Cook County Board of Commissioners, Grand Marais City Council, Grand Marais mayor and the ISD 166 School Board.