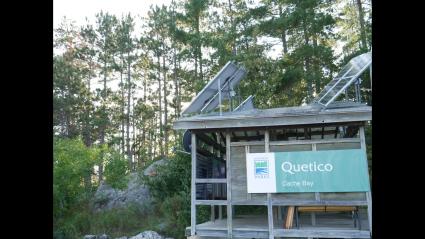 There are six active fires burning inside Quetico Provincial Park at this time, including one wildfire approximately 30 miles from Saganaga Lake at the end of the Gunflint Trail.

There are at least 88 wildfires burning in northwestern Ontario as of July 15, according to Jonathan Scott, a fire information officer with Ontario’s aviation, forest fire and emergency services department.

Of note among the large fires burning in Ontario at this time is the Kenora 51 blaze, which has grown to more than 207,000 acres as of July 14. The fire is burning in and around Woodland Caribou Provincial Park and is not under control, according to Scott.

WTIP has consistently shared information over the airwaves in July about wildfire smoke drifting into northern Minnesota from Canada. Some of the fires burning in Ontario at this time are the source of the smoke currently impacting air quality in the region. To view radar imagery of smoke density and where the smoke is coming from, click here.

WTIP’s Joe Friedrichs spoke with Scott about the wildfires burning in Canada at this time and their proximity to the Boundary Waters Canoe Area Wilderness, the Gunflint Trail and Lake Superior. The audio below is their conversation from July 15.