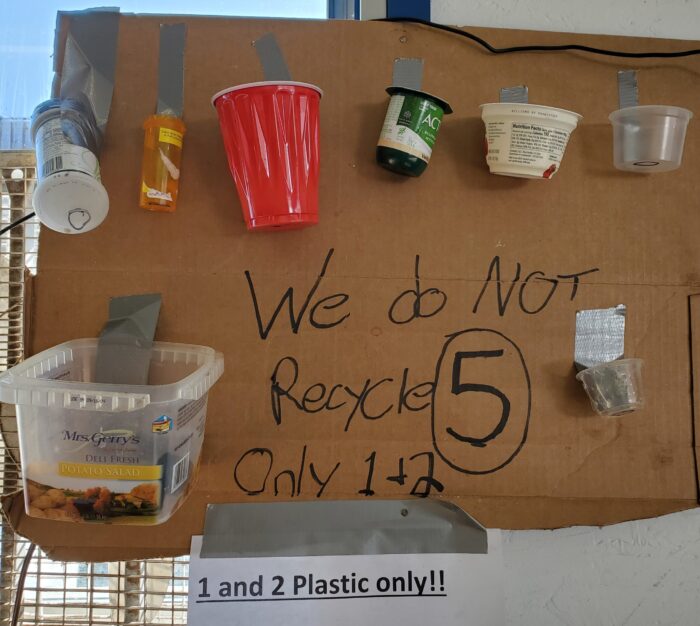 Kristina Mattson, one of the organizers of this local movement, came to Cook County about two years ago and she was pleased to see that the county had a recycling program. However, she noted the gaps that many North Shore folks have seen over the years, such as the inability of the local recycling center to accept any plastics other than those marked #1 and #2.

Mattson was involved in a zero waste group in St. Paul. She said that group worked to bridge waste reduction awareness with action. She tells WTIP that the local group had adopted some of the principles of the Twin Cities group, namely through a catchy acronym ACE—which stands for advocacy, connection, and education. She said with those efforts, the group can “ACE zero waste!”

There are currently 47 members on the Zero Waste Cook County Facebook page, but Mattson and others would love to see more community members joining this effort. The group is just beginning its work but members have already taken part in a major recycle sorting event with the Grand Marais Lions Club. The Lions Club is the organization that has taken on setting up recycling bins in the city of Grand Marais. Zero Waste Cook County recently assisted with sorting those recyclables with Lions Club members.

Zero Waste Cook County works to get the message out about the Cook County Recycling Center, offering tips on how best to prepare the materials that the public takes to the center. As an example of something people need to know, Mattson notes that here in Cook County, plastic bottle caps should be removed. In the Twin Cities, leaving caps on is allowed.

To learn more about Zero Waste Cook County, visit their Facebook page or contact Mattson at 651-249-8587 or email: kristinagac@hotmail.com.

Community members can also meet some of the members of Zero Waste Cook County at the Earth Day Fair at the Cook County Community Center on April 22 from 4:30 – 7:30 p.m.

Volunteers are also encouraged to sign up to help out at Friday’s Earth Day Fair on Friday. Organizers are hoping to find a few more greeters, helpers with set up and clean up and to run game booths. If interested, community members can sign up here.

WTIP’s Rhonda Silence spoke with Zero Waste Cook County representative Kristina Mattson about the group’s efforts and her reasons why she is so passionate about the principles of “refusal, reduction, and reuse”