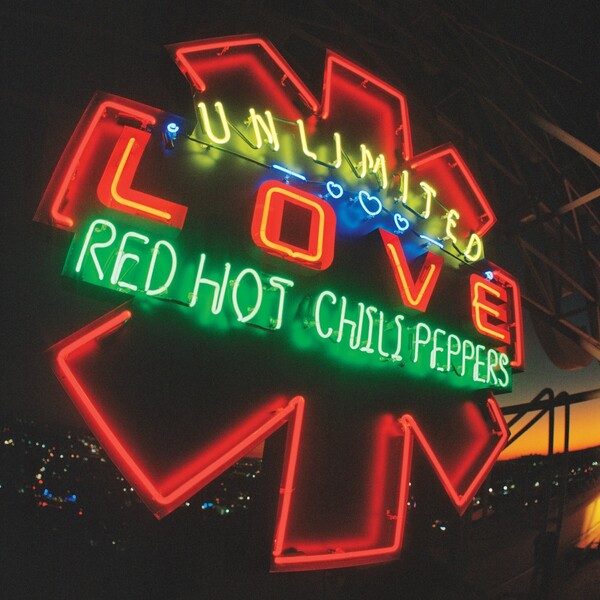 Way back in 1998, by family finally got a cable subscription, meaning my brother and I could watch new and exciting channels like THE BOX, a short lived, sort of original MTV copy-cat network that played requested music videos 24/7. There were two videos on the channel that stuck out to me more than any others, and they were both from the Red Hot Chili Peppers. The black and white gothic Tim Burton-looking video for Otherside, and the famously video-game inspired one for Californication. This is my very earliest memory of discovering new, current music, and from that point on the Chili Peppers were one of my very favorite bands throughout my adolescence and beyond, even today having a special place in my heart for kickstarting my interest in music. And now, though they’ve had a sort of confusing last decade, they’re back in their best configuration and a new album, called Unlimited Love.

It’s crazy to think that the Chili Peppers are in their 5th decade of making music, from their early more aggressive hip-hop flavored to their infamous “sock phase” and enduring numerous personnel changes. The band at its prime though is undoubtedly the eternal trio of Anthony Kiedis, Chad Smith and Flea, joined by guitarist John Frusciante. Their run of incredible albums through the 90s and 00s had him front and center, and after a hiatus he’s finally back. For fans who didn’t like the piano-heavy Josh Klinghoffer era of the band, this was an extremely exciting announcement, but one pandemic later and the his return to the band is lackluster at best. It’s great having the iconic tone of his guitar noodling, but the moments where he’s able to really spread his wings and rip are few and far between.

It’s not just John though, everything about the album lacks urgency and is a bit of a slog, and when your record is a whopping 17 tracks long, that’s the last thing you want. Flea’s bass playing is also a lot more subdued, and all of the tracks seem to be at a much slower tempo than you would expect. These tracks have a sense of wistfulness more than anything, but I hesitate to say that age has finally caught up with them though, as Kiedis is evidence against that. He sounds exactly the same he has for 30 years and is still spitting out the wackiest non-sequitor lyrics anyone could dream of.

There are some reviewers who are simply burying this album as a failed effort but I wouldn’t go that far, they’ve already been settling down in their sound for years now, and I think I liked that part of their history more than most. There are a few diamonds in the rough here and there enjoyable moments with horn sections, and when John does get to shine, he really does.  It’s far from perfect, or even decent by their standards, but at least it makes for a nice reunion.