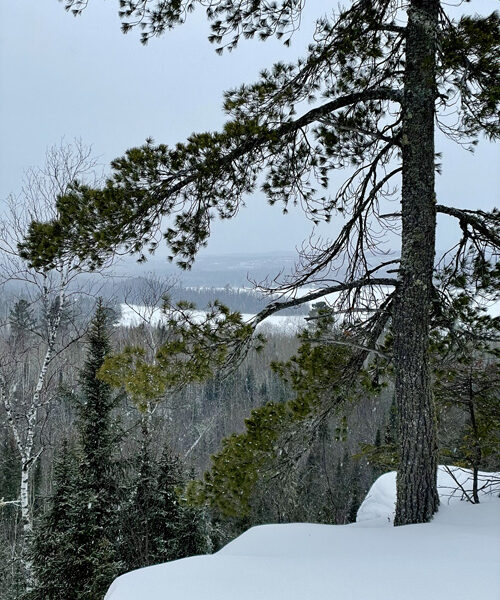 February on the Gunflint Trail started out above zero, then plummeted down to the twenties below. It climbed up well above zero just in time for the Beargrease Sled Dog Race. The warmer weather certainly affected the trail conditions for the race last week. Warm temperature and snow “like mashed potatoes” caused 11 out of 23 mushers to scratch. It might sound counterintuitive, but it is better for the sled dogs when it is colder outside – they are less likely to overheat and the colder snow lets the sled runners glide more easily. Still, it was so much fun to watch the race. Lars was in the thick of it and got some great photographs of mushers and dogs from the Lima Grade to Grand Portage. As usual, there were crossings along the Gunflint Trail that are guarded by volunteers, where there are bonfires and company and lots of cheering for the teams. Just like for the Gunflint Mail Run race, I walked out after dark to witness the night running of a few teams. I treasure that silent time waiting for the musher’s headlamp to flicker over the trees until first the dog team, then the dogsled glide into view and then slide on by, quietly disappearing around a curve into darkness. The next sled dog race will be during the Dog Days of Winter event held at Trail Center March 13.

I recently heard some local news from friends up and down the Trail (news being a broad term that covers otter tracks, wolf scat and who’s zooming who at the birdfeeder). Tucker Lake Annie said she has been enjoying a flock of tree sparrows that showed up as January turned to February. She also has been interested in how seemingly small variations in temperature and humidity can make the snow behave in different ways – this was made apparent by the difficulties the Beargrease mushers had with the course this year, and by slush packing onto her skis as Annie skied down Tucker Lake. As she said, “it seems so impossible that it can be 20 below and I’m wrangling ice-up on my skis!” She shared a link to the Tuscarora Lodge web site. It’s a good source to check for information on ice conditions: https://tuscaroracanoe.com/slush-myths/.

René from Seagull reports that their bird feeders have many Redpolls, Pine Grosbeaks and Hairy Woodpeckers.  And there’s always a battle with the naughty Red Squirrel. The birds land and feed, Mr. Squirrel shoos them away; they fly to the trees, he goes away; they return and the pattern repeats.

Gunflint Kate saw the Needham otter crossing her road just before Gem, the otter chaser, trotted by. She wondered what the otter was doing so far from water when there is an open creek a short distance away.  No answers but this when she looked up her question: ‘River otters can travel long distances away from water.’  She said she can’t imagine otters hunting mice in the subnivean but maybe they do.

If you are wondering what “subnivean” means, you are not alone. That was a new word for me, too (thanks Kate!). She kindly sent me a web link where I read an essay about the subnivean zone, which refers to that area between the ground and the bottom of the snowpack. That’s where small animals live out their winter lives in relative comfort at a steady temperature of about 32 degrees, as long as there is about 8” of snow cover. The snow hardens at the bottom of the snowpack as it sublimates; that is, the snow goes from a solid to a gas without melting. Moist vapor rises from the earth and cools, hardening into densely packed ice crystals. That creates a fairly stable ceiling until spring weather comes and the whole thing collapses. Owls, coyotes and foxes also collapse the snow by landing on it as they hunt by hearing and by scent for the small mammals wintering in the subnivean. The snow above acts as insulation, protecting the mice and voles that live in that zone from sub-freezing temperatures. Insulation is one of three strategies to surviving winter, the other two being migration or hibernation. It’s migrate, hibernate or insulate for us northern creatures. This particular creature mostly utilizes the latter two strategies, with a brief migration at the end of winter to hit the reset button. To be honest, my hibernation state more closely resembles the torpor of frogs, turtles and toads that lie buried in mud all winter. My stay in the torpid state is shorter than theirs, though sometimes it can last an entire afternoon.

Every day I notice evidence of the changing light of late winter that reminds me that the world is still turning and tilting on its axis. Longer daylight hours and the changing angle of the sun make me think about Spring, and I start wondering about what kind of potatoes, tomatoes, peppers, leeks and onions we will grow this year. But today it is gray and windy outside. A light snow has been falling for hours and hours. The wind is whipping the small flakes around, creating big drifts like dunes right next to areas that have little snow accumulation. We really enjoyed those days of sun and warmer temperatures last week, but today Winter is saying, “I am not done yet.” And so we are humbled. I know that the day is not far off when male chickadees will start singing their two-note spring song. I bet you know the song I’m talking about: the first note high, the second note lower. Sometimes this is referred to the “fe-bee” song, but to my ears it sounds more like “sweet-heart.” A little south of us, that day has come. Sweet Kelly heard the chickadees singing their spring song yesterday in Duluth.

Want to learn more about the subnivean zone?: