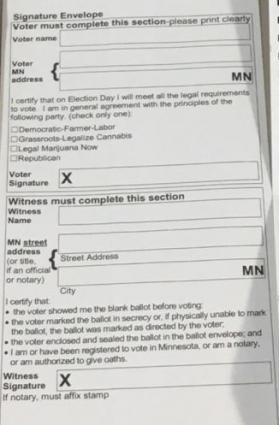 Minnesota (for the first time since 1992) will have a presidential primary on Tuesday, March 3.

WTIP spoke with County Auditor Braidy Powers about the presidential primary ballot, which looks different than ballots in elections in years past.

For example, the only race on the March 3 ballot is the presidential contest.

Each mail ballot in this presidential primary has two separate ballots inside. County Auditor Braidy Powers explains that voters must choose the ballot for the political party of their choice. The other ballot should be destroyed.

The voter should then complete his or her ballot as usual, with the voter filling in the circle to select their candidate. As in the past, once completed, the ballot should be placed in the brown privacy envelope.

The brown privacy ballot is then placed in the white envelope on which the voter’s name is written—and which a fellow voter signs as witness. The big difference in this presidential primary is that envelope.

For the presidential primary, in addition to the requirement to have a fellow voter sign as a witness, there is a new box on which the voter must declare their party affiliation. The options are Democratic-Farmer-Labor, Grassroots-Legalize Cannabis, Legal Marijuana Now, or Republican.

The two marijuana-affiliated parties are not participating in the presidential primary, so if a voter checks one of those boxes, it will lead to a ballot being rejected.

And, if a voter chooses not to check a box at all, their ballot will be rejected.

Auditor Powers tells WTIP that his office attempts to reach voters when a ballot is rejected. This has happened in past elections, when voters don’t get a witness to sign the outer ballot envelope.

If it is too close to the March 3 election to send and return a replacement mail ballot, the Auditor’s Office will attempt to reach the voter by phone to let them know their ballot has been rejected. The voter then has the opportunity to come to the Auditor’s Office to submit a corrected ballot.

For that reason, Auditor Powers stresses the importance of completing this new section on the ballot. If anyone has questions about the presidential primary, they are encouraged to stop by the Auditor’s Office or call 218-387-3640.

WTIP’s Rhonda Silence spoke with Auditor Braidy Powers about all this.