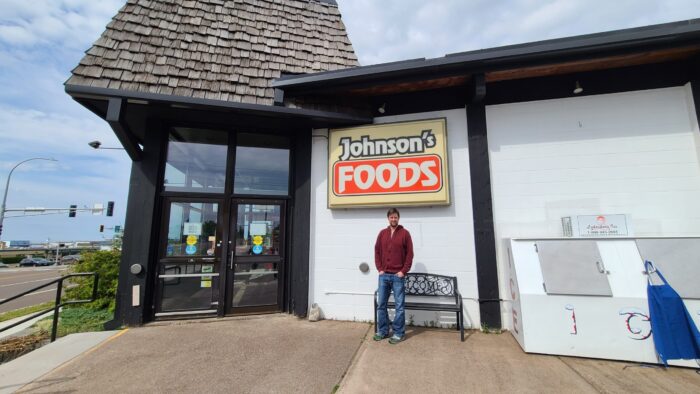 The former owners, Mark and Robin Johnson, officially handed over the business last month on June 27.

While the quaint family grocery store will not remain in the Johnson family, the new owners have worked there for over a decade and have felt like a part of the family. Jacob Muus and Crystal Clemons are excited about their new venture and looking forward to continuing to be a valuable service in the community.

Johnson’s Foods was started in 1932 by Matt Johnson, along with his two sons, Ted and Tumsey (also known as Oswald). Multiple members of the Johnson family have worked at the family business throughout the years, alongside dedicated long-time employees.

Muus shared that the conversation with the previous owners to take over Johnson’s Foods started years ago. However, this past winter, the discussion became more serious.

“They wanted Crystal and I to have the first opportunity at taking things over from them because we’ve been here for so long,” Muus said.

Throughout his time working at Johnson’s, Muus has enjoyed seeing the kids in the community grow up and go off to school, people fall in love and get married, and even some that get divorced. “Seeing the daily lives of everybody here. And just being able to be a part of that and provide them with, you know, our goods,” Muus said.

New owners Muus and Clemons don’t anticipate making any changes right away. However, they do have some ideas for the future. But first, they want to get through the busy summer season and take things one step at a time.

Muus said they will not be jumping back into doing trays anytime soon, “That’s kind of a big undertaking, and so we won’t be doing any kind of large meat or cheese trays or anything like that for anytime soon.”

While the keys and paperwork have been handed over, the former owners will remain working at Johnson’s for the next couple of months. Muus shared that even though they have switched employee and owner positions, the Johnsons have been a big help behind the scenes. However, they do have their sights on retirement in a few short months.

Muus shared some final thoughts with the community, “Thank you for all of your support that you’ve had over the years with us, and we hope that we continue to have your business.”

WTIP’s Kalli Hawkins met with new owner, Jacob Muus at Johnson’s to talk about the new venture. Audio from the interview below.