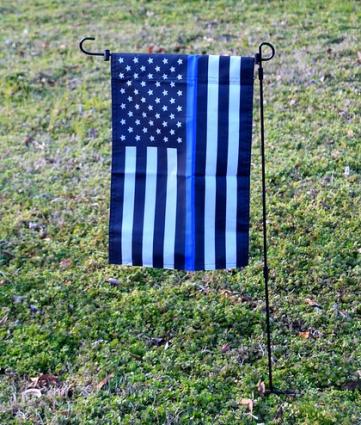 This summer in Cook County, flags and signs have been the subject of controversy. In July, citizens were disturbed to see a gravel hauling truck on the local road project sporting a Confederate flag. Through July and into this month, Black Lives Matter signs have been vandalized throughout the county.

And now, another flag is at the center of controversy. This week, Grand Marais Recreation Park Campground host Gary Radloff was asked to remove a “Thin Blue Line” flag from his camping trailer.

The “Thin Blue Line” is a symbol of support for law enforcement. Similar flags and signs represent other emergency service organizations, for example the “Thin Red Line” for firefighters and the “Thin Gold Line” for emergency 911 dispatchers.

Radloff is a retired police officer and the flag was a gift to him from the Minnesota Sheriffs Association in recognition of his role in the December 2011 shooting at the Cook County courthouse.

Radloff has been flying the Thin Blue Line flag at the campground host site for many years, with no complaints, he says. However, this year, Gary and his wife, Janet, were approached by Grand Marais Parks Manager Dave Tersteeg and asked to take the sign down.

Apparently, complaints were lodged with the park and other entities about the sign showing support for law enforcement on what is in essence, public property.

Radloff and his wife agreed to take the flag down from their trailer at the recreation park campground. However, Gary says the flag will not be hidden away. He now has it flying at his Grand Marais residence.

WTIP’s Rhonda Silence spoke with Gary and Janet Radloff and city officials about this. Here’s her report.