In addition to the fires inland in Minnesota and Ontario, there is a wildfire burning at Isle Royale National Park, the remote island in Lake Superior, 17 miles away from Grand Portage Bay.

The Horne Fire, near the shore of Duncan Bay and the Tobin-Duncan Portage, is now approximately 230 acres in size. The fire was discovered on August 10 and the suspected cause is a lightning strike.

According to the most recent update from the National Park Service, the fire is 15% contained. Fire crews from Isle Royale National Park, Hiawatha National Park and the Fond du Lac Band of Lake Superior Chippewa are monitoring and fighting the fire where it is near structures.

A number of closures have been made to Isle Royale trails and campgrounds and a number of people have been evacuated from the historic cottages on the island. In total, 47 structures are threatened by the fire. One outbuilding—an outhouse—was destroyed by the fire.
For updates from Isle Royale National Park, visit this website.

The Connolly family has maintained their historic cottage on Isle Royale, Cliff Crest, since building it in 1914. WTIP’s Rhonda Silence spoke with Ellie Connolly, in Gordon, Wisconsin, where she waits to learn the fate of her island home. 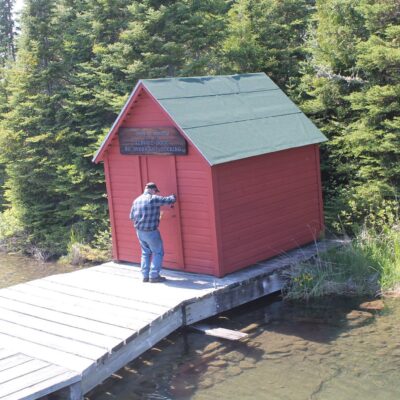 The Tobin Harbor mail dock was threatened by the Horne Fire, but is safe for now. File photo by Rhonda Silence