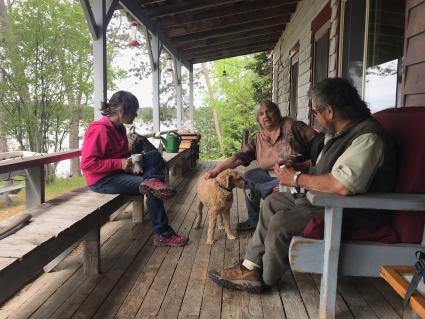 Dick and Sherry Powell, longtime residents of Saganaga Lake at the end of the Gunflint Trail, are growing anxious after unwillingly spending nearly a year at their seasonal home near Silver Bay.

After coming down to their home near Silver Bay on April 1, 2020, the COVID-19 pandemic has made it nearly impossible for the Powells to get back to their home and property on the Canadian side of the massive border lake.

The border between the U.S. and Canada is currently scheduled to be closed to non-essential travel until at least April 21. The closure has been extended 12 times to date, most recently on March 18.

Sherry arrived to Sag in 1975 and 2020 was the first summer and fall that the couple have not spent on Sag since that time. It was Dick’s first away from his longtime home. The Powell family has been a fixture on Saganaga since the early 1900s.

The Powells purchased their home near Silver Bay in 2010 as a means of avoiding the shoulder seasons on Sag during freeze up and ice out. Both Dick and Sherry are in their 70s and the purpose of the property in Silver Bay was to make life easier. Now, in a sense, it’s holding them back from getting to their favorite place on earth, Saganaga.

Complicating the Powells’ situation, as well as others who own property on the Canadian side of Sag, is the fact that even if the port of entries do open on the U.S. and Canada border do reopen, they would still need to have Remote Area Border Crossing permits authorized by the Canadian government. Known as an RABC, these permits allow U.S. citizens to cross into Canada on some border lakes from Lake Superior over to Rainy Lake without stopping at customs checkpoint, such as the Pigeon River entry point in Grand Portage. These permits cost about $30 to process and must be renewed annually. Sherry says occasionally someone from Canadian customs calls her about the permits.

Matt Ritter is a manager at Voyageur Canoe Outfitters at the end of the Gunflint Trail. He says the likelihood of RABCs being available for canoeists looking to paddle through Cache Bay or other waters on the Canadian side of Sag looks bleak.

“It’s all speculative, but it doesn’t look good,” Ritter says.

Without question, the Saganaga community always has been a tightly knit group of people. Ritter says they often come together to do things like fight fires, rescue stranded canoeists or help one another with cabin projects and emergency repairs. They would also come together for communal dinners and evenings around the fire. In addition to the pandemic and the border closure, Ritter points out that 2020 brought the loss of a well-known member of this community: Longtime Quetico Park Ranger at Cache Bay, Janice Matichuk.

Dick and Sherry had twin daughters who they homeschooled and raised on Sag. Their names are Laura and Paula. Both remain in the border lakes area that is Cook County and the sisters remain close to their parents. Paula says the border closure has been hard on Dick and Sherry, though largely they remain upbeat and optimistic.

Meanwhile, for Sherry, there is another looming fear that has nothing to do with a worldwide pandemic or if or when the border will eventually reopen. When Sherry returns to their home on the Canadian side of Sag, she’s worried about how it will actually feel when she is finally able to come home. Most notably, she wonders about doing some of the basics, things like getting water for the cabin and how the whole operation works at the remote outpost.

In the meantime, Sherry is trying to stay positive and readily admits that many people are having a harder time through the pandemic than she and Dick are, despite the fact they can’t go home.

“We’re trying to be happy with what we have,” Sherry says, “but we would rather have Sag.”