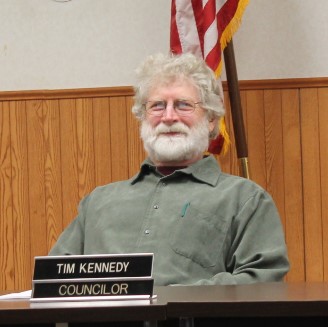 Kennedy did not file for reelection to the council when his term ended. Hear Kennedy’s comments about not running again and why citizens should become involved in local government here: City Councilor Tim Kennedy will not run for reelection.

There was a four-way race for two city council seats and Michael Garry won the race for the vacant council seat. Councilor Craig Schulte did run again and was reelected.

At the December meeting, it was noted that Kennedy was the city council representative on the Grand Marais Planning Commission and the Public Utilities Commission, so the council will have to decide who will take on that role. That reorganization will take place at the first city council meeting of 2021, on Wednesday, January 13 at 6:30 p.m.
Because it was Kennedy’s last meeting, after serving for 18 years, his colleagues took a few moments to wish him well. WTIP’s Rhonda Silence shares some of that conversation.