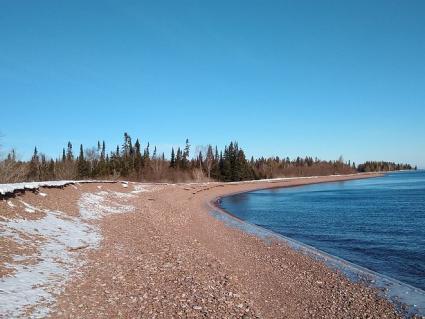 Cook County is one step closer to having another state recognized Scientific and Natural Area (SNA).

The newest addition to the SNA designated locations in Cook County will be known as the Icelandite Coastal Fen, a 25-acre site near Colvill. Located about 10 miles from Grand Marais near Kimball Creek, the site has been under consideration to become an SNA for more than two decades.

Molly Roske, scientific and natural area supervisor for the Minnesota Department of Natural Resources based in Duluth, presented information on the request of the “state-to-state” transfer of ownership of the parcel during a meeting of the Cook County Board of Commissioners Tuesday, Sept. 28.

Icelandite Coastal Fen is one of only a few existing coastal wetlands along the North Shore and one of two fens immediately adjacent to Lake Superior. The term ‘fen’ is used to describe a class of open, wetland plant communities dominated by sedges, which develop where the ground surface is continuously wet and a layer of dead plant material accumulates to form peat, according to the DNR. The differences in the environmental conditions of bogs, fens, and wet meadows are reflected in the plants that grow in them, Roske said.

The specific area east of town is located in an area of Icelandite bedrock. The site also contains rare species, including auricled twayblade, a state-endangered orchid known from only nine other locations in the state.

Commissioner Stacey Hawkins, who voted against the designation, questioned both how the DNR would pay for the land transfer and if designating the area as an SNA would impact access and use of the public land.

The site is currently administered by the Minnesota Department of Transportation (MnDOT). Because of challenges associated with transferring land from one state department to another, the process has become prolonged, Roske explained. Recently, she continued, the DNR made an offer of $300,000 to MnDOT on the 25-acre parcel. Funding for the transfer involved a collection of funding streams, including the state’s Board of Soil and Water Resources Reinvest in Minnesota Reserve program.

SNAs protect the best of Minnesota’s remaining natural landscapes, according to the DNR. They are managed to perpetuate and enhance these features and are generally open to the public for compatible nature-based recreation, education, and research, according to the DNR. Protection of Icelandite Coastal Fen as an SNA would help Minnesota advance toward the DNR’s goal of protecting adequate representative samples of Minnesota’s habitats.

Following the county board’s approval on a 4-1 vote, the acquisition would likely close by December or early 2022, Roske said.

There are currently six SNA’s in Cook County, including Butterwort Cliffs near the Cascade River and Sugarloaf Point on the west end of the county near Lake Superior.

The audio below is Roske speaking about this topic during the Sept. 28 meeting of the Cook County Board of Commissioners