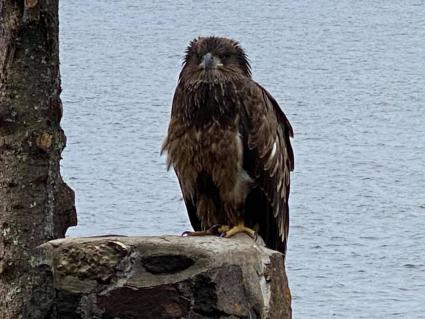 A juvenile eagle was spotted wandering around along Highway 61 immediately across from Cascade Lodge and Restaurant in Lutsen early this morning, August 13. The bird did not appear to be injured, however, it was acting strangely and slowing traffic.

At one point, a woman attempting to keep the young eagle from going into traffic got too close to the bird which attempted to defend itself. The chef at Cascade Restaurant, Bernard “Bernie” Banks, had stepped outside to check on the eagle, which he had seen earlier. He was shocked to see the eagle seeming to attack a woman.

The quick-thinking chef took off his chef’s coat and ran at the woman and bird, throwing his coat onto the eagle. The bird released its grip on the woman’s leg and both Banks and the woman ran away from the agitated bird. (Click on the slideshow to see the chef’s jacket after the incident.)

WTIP’s Rhonda Silence spoke with Chef Bernie Banks about his encounter with the eagle earlier today. 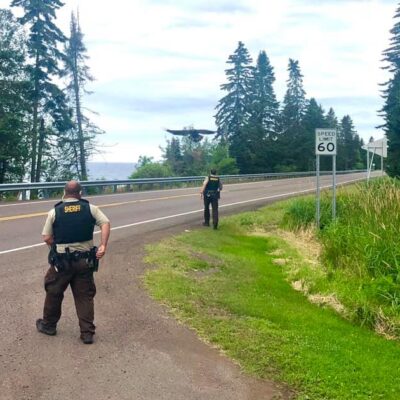 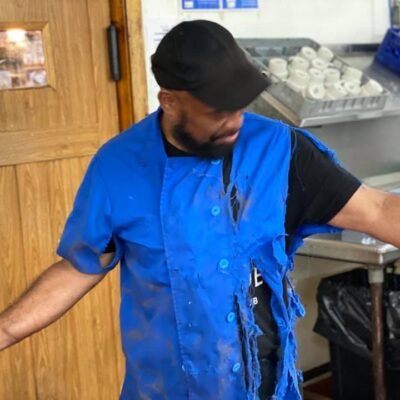 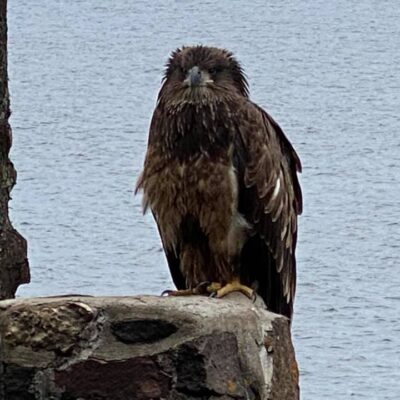 Unfortunately, the young eagle near Cascade Lodge was also in distress. It did not fly off after the incident, which happened around 9 a.m. It remained in the area until early afternoon, making short flights, and landing on vehicles in the area. A Cook County Sheriff’s Office deputy was assigned to assist with traffic control and to try to keep the public from disturbing the eagle. At one point, the eagle perched atop the sheriff’s office squad car. See video taken by Cascade Lodge here.

Tom McAleer, owner of Cascade Resort, called the University of Minnesota Raptor Center and they dispatched two volunteers from the Duluth area. However, the eagle flew off about an hour before they were able to reach Lutsen.

WTIP’s Rhonda Silence spoke with Elda Hein, one of the volunteers with The Raptor Center as they were leaving the North Shore about the fate of the young eagle.

Tom McAleer, owner of Cascade Resort, saw the young eagle when it finally flew off in late afternoon and he was more optimistic. He said it appears the eagle was flying well and soared high into the sky.

Jessica Parson, of the Minnesota Department of Natural Resources Wildlife Division, also told WTIP that she was a bit more optimistic. She did not see the eagle, but noted that as a young bird, it may just have tired of flying and landed to rest, when all the people around the resort disturbed it. She said since it finally appeared to have enough strength to fly off, it may be okay. She said the best thing for the eagle is to be in the wild, away from humans.
The Raptor Center volunteers encourage anyone who spots the young eagle, or any other raptor that appears to be in distress to contact either the Raptor Center at 621-625-0201 or Wildwoods Wildlife Rehab at 218-491-3604.