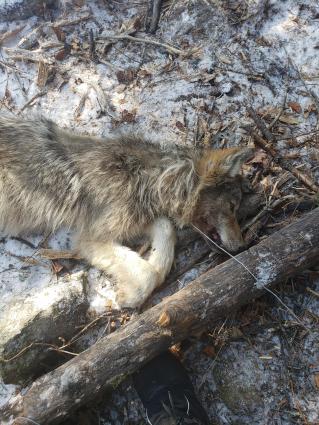 WTIP received a call on February 20 from a Grand Portage area man who had a very interesting wolf encounter. Brian Neil, who frequently runs along scenic Highway 61, spotted a wolf in the woods just off the highway apparently in distress, possibly caught in a trap.

Neil ran back to his home where he had phone service and called 911 to report the wolf. The 911 dispatcher connected Neil to the Minnesota Department of Natural Resources, which noted that because the wolf was on Grand Portage Band of Lake Superior Chippewa land, the investigation would best be handled by the Grand Portage conservation office.

That led to a call to Seth Moore, director of Biology and Environmental Services for the Grand Portage Band of Lake Superior Chippewa. Moore and a fellow biologist responded and discovered that the wolf had been caught in a neck snare. It had apparently traveled quite a way after being caught before the snare got snagged on vegetation.

Moore and his colleague were able to tranquilize the wolf, a young female, about 55 pounds, to remove the snare. While the wolf was tranquilized, Moore was able to draw a blood sample and put a radio collar on it. Grand Portage Biology and Environmental Services will track the wolf’s movements to see where it travels next.

Moore noted that the neck snare was likely a legal device used for trapping a species other than a wolf. That was the case.

After speaking with Moore, WTIP learned more of the story from a local, licensed trapper. This individual had caught the wolf in a coyote snare on Thursday, February 18. In accordance with Minnesota trapping regulations, unauthorized animals must be released, which was done. It is a job that takes three people, one on a catch pole. The neck snare was successfully removed, however in the scramble, the wolf got away with the cable from the catch pole. That is what got snagged in the brush.

Normally these snares kill an animal, but the wolf not only survived the snare, it traveled many miles with the catch pole cable attached before it became tangled in trees just off Highway 61.

Moore said, “This is the luckiest wolf in the world, to be honest.”
Click here to see a video taken by the biologists documenting the wolf’s condition.

Click here to see a second video taken by the biologists approaching the wolf.

WTIP’s Rhonda Silence spoke with Brian Neil, who first spotted the wolf trapped in the forest as he ran by. Here’s their conversation.

Rhonda Silence also spoke with Seth Moore, director of Biology and Environmental Services for the Grand Portage Band of Lake Superior Chippewa, about the rescue of the snared wolf.