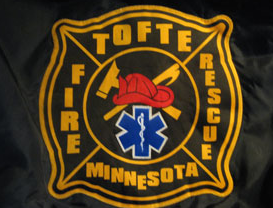 All three West End fire departments were paged to a fire at a Bluefin Bay Resorts condo at 9:49 a.m. on May 6. A caller reported gray smoke, changing directions.

The Tofte, Schroeder, and Lutsen fire departments and First Responders and Cook County North Shore Ambulance were paged.
The first emergency responders were on scene by 10:03 a.m. and found smoke coming out of the roof of the westernmost Bluefin Bay unit. By 11 a.m., firefighters reported that the roof was fully engulfed, but only on the exterior.

Highway 61 was briefly shut down as the fire departments worked to knock down the blaze from both the east and west.
By 12:14 p.m., the fire was halted. No smoke or flames had spread from the apparent point of origin, the attic area. All responders were clear of the scene by 1:11 p.m.

The Cook County Sheriff’s Office reports that there was moderate damage to one unit, no other structures were compromised.
The cause of the fire is not known at this time.