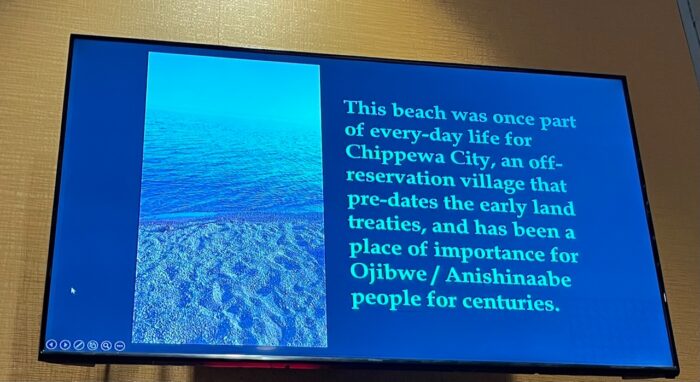 It was stolen land.

And it’s being rightfully returned.

Those were the sentiments expressed by Margaret Anderson Kelliher, the former commissioner for the Minnesota Department of Transportation, during a public event Friday, Nov. 18 at the Grand Portage Lodge. The former commissioner spoke within eyesight of the rugged coastline of Lake Superior. At the event, tribal leaders, local and state officials, and community members witnessed a historic land conveyance from the state to the Grand Portage Band of Lake Superior Chippewa. According to MnDOT officials, this is the first time in state history MnDOT transferred publicly-held land to a tribal nation off of reservation lands in Minnesota.

The land at the centerpiece of the event is a public beach just east of Grand Marais. A blue screen with a photo of the beach was on display as visitors arrived Friday morning. It read: “This beach was once part of every-day life for Chippewa City, an off-reservation village that pre-dates the early land treaties, and has been a place of importance for Ojibwe/Anishinaabe people for centuries.”

In 2021, the Grand Portage Band submitted an official request to the Minnesota Department of Transportation to obtain the small parcel and beach located just east of Grand Marais. Grand Portage Tribal Chair Bobby Deschampe and MnDOT officials, including Commissioner Nancy Daubenberger, signed the deed to the land Friday to complete the process of returning the land to the Grand Portage Band.

Duane Hill is the district engineer for MnDOT’s District One, which includes Cook County. He told WTIP that MnDOT transferred the land at Chippewa City at no cost to Grand Portage. According to the Cook County Assessor’s Office, the value of the land is approximately $283,000.

Deschampe previously said in a public meeting in Grand Marais that it was important that the Old Shore Road be returned to the Grand Portage Band.

Deschampe said in a county meeting in April 2021 that when the Grand Portage Band acquired the land it would remain accessible. The historical parcel can serve to “to educate people, it’s to let them enjoy the beach, the lake,” he said.

“One of my biggest things is to make sure this property stays accessible for tribal members, for anybody, that wants to go down there and visit the beach,” Deschampe said during the meeting. “The lake is a gift to us. It’s getting to be fewer and fewer places along the North Shore where you can actually go down and enjoy Lake Superior.”

Commonly referred to as “Passion Pit,” the area located off Old Shore Road has been used by local residents and tourists as an access to a small beach on Lake Superior. Though it has been used for decades by local residents, its popularity increased during the 2020 pandemic summer as more visitors arrived to the North Shore, including an abundance of people aiming to recreate outdoors. Following the uptick in activity, nearby property owners and others complained the site became impacted by garbage, late-night debauchery, illegal parking and trespassing issues.

A committee formed later that year in an attempt to address some of the issues. The committee has since finalized its work, which included drafting a formal letter of support regarding the acquisition of the MnDOT property into the Grand Portage Tribal Trust lands.

When the land in question potentially went up for sale, there was some interest expressed in maintaining the property in public ownership due to its historic connection with the old Chippewa City area and heritage, and as a local access to the beach, according to Cook County Administrator James Joerke. The process to return the land to the Grand Portage Band took approximately one year, once serious negotiations were underway, according to MnDOT officials.

After the land conveyance was complete Friday, Deschampe held the deed to the property high above his head with both hands. Everyone in attendance burst into applause as the tribal chair recognized the significance of the land conveyance.

Local author and WTIP staff member Staci Drouillard wrote extensively about the history of the area in her 2019 book, “Walking the Old Road.” Drouillard spoke during the Nov. 18 event in Grand Portage, noting that by the late 1930s, the original residents of the land had largely moved away because of development at the hands of white settlers and tax policy that did not favor the Indigenous community. Sentiments shared Friday shed light on the notion that to have the land returned to the people of Grand Portage is important in the present, the future, and as a means to recognize the past.

“It is this strong connection to our homelands that lies at the center of who we are, and it explains why the people who were born and raised in Chippewa City have maintained such a strong bond with both the physical place and each other,” Drouillard writes in “Walking the Old Road.”

April McCormick is a member of the Grand Portage Tribal Council. With her young children by her side during the event Friday, she spoke of the significance of having land returned to the Grand Portage community. The process, McCormick said, needs to start somewhere, even if it is one small parcel near Grand Marais.

“It is a sacred and spiritual thing to have this land back,” she said.

WTIP’s Joe Friedrichs spoke with the commissioner of the Minnesota Department of Transportation during the event in Grand Portage. Audio below. 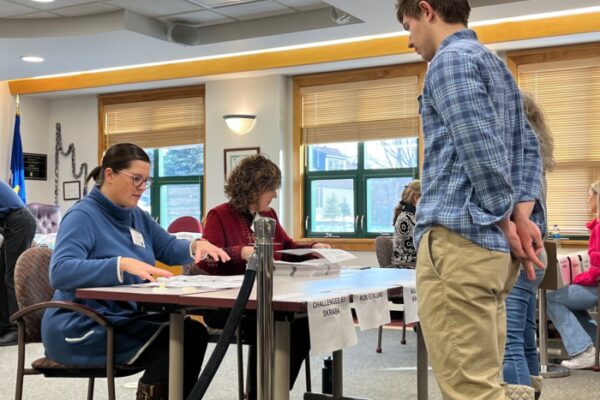 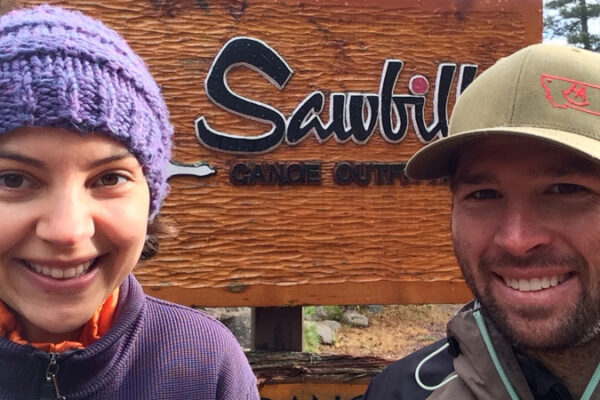 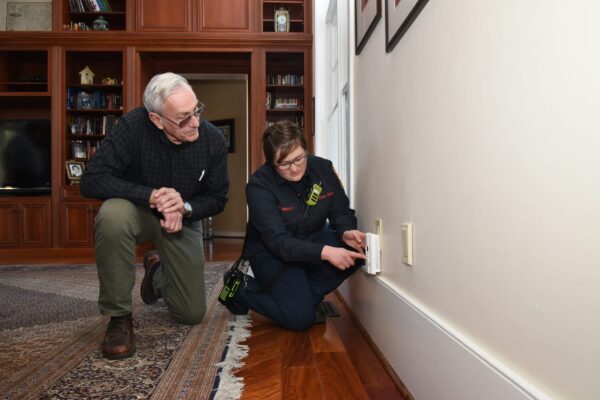