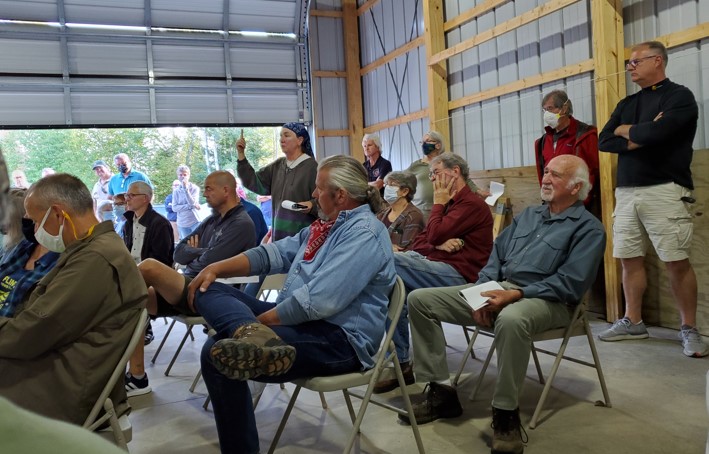 About 100 community members gathered at the Schaap Community Center for an update on Monday evening on the John Ek and the Whelp fires.

Patrick Johnson, acting East Zone Fire Management Officer, updated the crowd on the conditions that led to the closure of the Boundary Waters Canoe Area Wilderness and Superior National Forest lands north of Poplar Lake. Johnson said nearly every day through spring and summer has been “the hottest and driest days” on record. He displayed charts that show that conditions are significantly drier than they were during the Ham Lake Wildfire.

Johnson said the ¾” of rain received in the fire areas gave some relief but cautioned that if there is another week of little to no precipitation, the indices will be right back where they were.

For that reason, Forest Service officials told the public, there will be no changes to any of the closures in place at this time.
Superior National Forest Tofte District Ranger Ellen Bogardus-Szymaniak acknowledged the frustration of some outfitters who have lost all business and of resort owners who have seen reservations canceled because guests are fearful of visiting the Gunflint Trail. She said the fires—and the weather are being closely monitored. Depending on weather conditions—if the forecast is correct that the rain predicted for Thursday and Friday occur—the Forest Service will begin reopening areas, in phases.

She thanked businesses for their patience and said she understands their livelihood is on the line. But, she said, she would rather see people alive to make their livelihoods.

There were many questions about the use of sprinklers—when should they be turned on?; if there is an evacuation, will anyone keep them running for homeowners; and one did the property owners who lost structures in the Greenwood Fire in the McDougall Lake area had fire water sprinklers installed?

Ranger Bogardus-Szymaniak said although the community had recently been working toward Firewise clearing on properties, there were few sprinkler systems in the area.

Michael Valentini of the Gunflint Trail Fire Department answered questions about the sprinkler systems, urging people to have them running now to ensure they will operate properly in case a wildfire does make it to the Gunflint area. He also said by running sprinklers now, the soils and vegetation could be saturated enough to survive a wildfire even if the sprinkler system for some reason failed.

Valentini also explained that if homeowners need to evacuate, they need to turn their sprinkler systems on and leave. For property owners that are not in the area at the time of an evacuation, they need to have someone to get their system going for them. During an evacuation, the firefighter’s first job is to see that people are out of the area. After that, they will work to defend structures and If safely possible, firefighters will work to keep sprinkler systems working.

There were questions about the Canadian fires. FMO Johnson said the fires across the border received about an inch of rain. He said they are not showing much smoke now. He said if the fire expands, it will likely grow toward the Crooked Lake/Basswood Lake area near Ely. He said conditions would have to change dramatically for the fires to reach the Gunflint area. However, he assured the audience that the fire management team continues to monitor the Canadian fires.

A property owner noted that at a previous public information meeting, the fire management team said there was a 1 ½ percent chance of the current wildfires reaching the Gunflint Trail area. The man asked if that was still the case. FMO Johnson said yes, the fire management team model still feels that is a realistic number. The questioner replied, “I’m just thinking, it’s a 99 percent chance it’s not happening.”

Heads nodded, but the discussion continued on how to be prepared for that worst-case scenario.

The Whelp fire is five miles northwest of Sawbill Lake. The Whelp Fire remains at an estimated 50 acres.

Neither fire is considered contained at this time.

WTIP’s Rhonda Silence was at the public information meeting and spoke with some Gunflint Trail residents afterwards. Here’s her report. 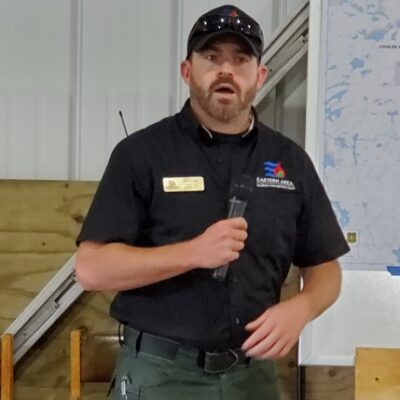 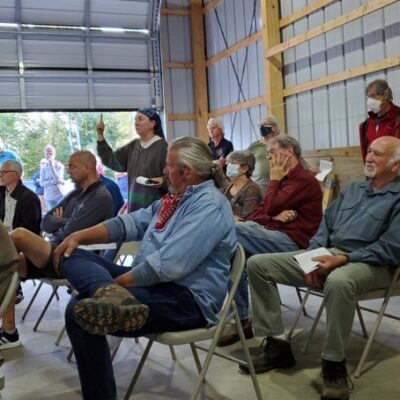