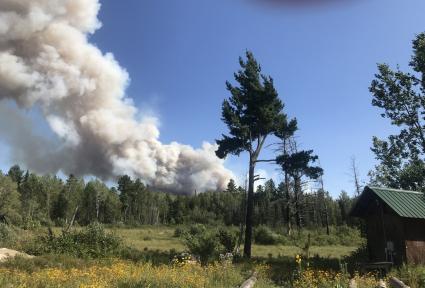 Fire crews in northeastern Minnesota were battling a “rapidly growing” wildfire to start the new week, adding to a list of wildfires in the region that has prompted Gov. Tim Walz to authorize the National Guard to assist in firefighting efforts.

Monday morning, the size of the fire was estimated to be about 1,000 acres and growing, according to the Minnesota Pollution Control Agency. Southerly winds are expected over the region for the next few days and will transport the smoke plume north. Smoke will impact areas near and immediately downwind of the fire to the north and northeast today. Impacts are expected to continue through at least tomorrow as the fire continues to burn.

Superior National Forest officials warned that it could spread quickly due to high winds and dry conditions.

Law enforcement in Lake County asked residents near McDougal Lake to prepare for an evacuation and cleared visitors from the area. The wildfire was spotted around 3 p.m. Sunday about 15 miles southwest of Isabella near Greenwood Lake and Sand Lake. The fire, according to Lake County law enforcement, is believed to have started from a downed power line.