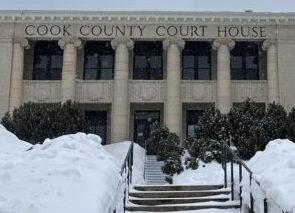 A Minnesota man was sentenced to four years in prison for sexually assaulting a Cook County woman at a condominium on Ski Hill Road in Lutsen.

Andrew Donald Knott, 31, of Owatonna, was sentenced Feb. 28 in the Cook County Courthouse in Grand Marais.

Knott was convicted in December 2021 on two felony counts of criminal sexual conduct. Knott was also found guilty of an additional gross misdemeanor charge stemming from the incident.

WTIP does not name the victims when reporting on instances of sexual assault.

The sentencing Monday by Judge Michael Cuzzo came after several victim impact statements were read aloud by county officials on behalf of the victim, as well as those of her friends and family. The impact statements noted that the victim “is a different woman now” than she was before the assault. The victim’s mother observed that her daughter is a “shell of herself” following the incident and that she does not engage in the world or communicate with family in the way she did prior to the assault.

Before sentencing, Cuzzo spoke directly to Knott in the courtroom and said he was moving forward with the 48-month sentence. Knott’s attorneys were hoping for a probationary sentence and no days behind bars. Among the primary reasons Knott will serve prison time, Cuzzo explained, are the fact Knott has failed to show he accepts responsibility for his actions and because he showed little signs of remorse for what occurred.

According to the criminal complaint:

On Jan. 25, 2020, Cook County law enforcement responded to North Shore Health, the local hospital in Grand Marais, where a woman being treated for medical issues reported that she was sexually assaulted. The woman told medical personnel and law enforcement she had been raped.

Deputy Leif Lunde responded to the hospital to take the victim’s statement. The woman told authorities she met Knott and others the previous night and consumed alcoholic beverages at various locations in Cook County. After consuming too much alcohol to drive, the woman became tired and went to rest in a bedroom inside the condominium. The woman said she woke up at some point in the night to a man sexually assaulting her. After describing the perpetrator, Cook County authorities traveled to the condominium in Lutsen and interviewed potential suspects, including Knott. All of those interviewed, including Knott, denied any wrongdoing. Authorities collected a DNA sample from Knott. This sample later matched sperm cells found on the victim’s clothing.

Nearly two years later, a Cook County jury convicted Knott on all charges, including the two felony crimes that acknowledge he “did engage in sexual penetration with another person, knowing or having reason to know that the victim was mentally impaired, mentally incapacitated or physically helpless.”

Cook County Attorney Molly Hicken served as the lead prosecutor on the case. She told WTIP in December that her office is “thankful for the courage the survivor had in testifying truthfully.”

“Any credit for these convictions goes to her,” Hicken said, “and to the thoughtful and difficult work the Cook County jurors accomplished to bring this defendant to justice.”

Upon release, Knott will have to register as a predatory offender, Hicken said.

Hicken noted that while the maximum penalty is 15 years for such crimes, Knott was never likely to serve that because sentences in Minnesota are governed by a regulation that sets “the presumptive sentence in this case at 48 months.”

Family members and other associates of Knott were in the courtroom Monday. Several of those present wept as the sentencing was read and while saying goodbye to Knott as he was led out of the courtroom in handcuffs.