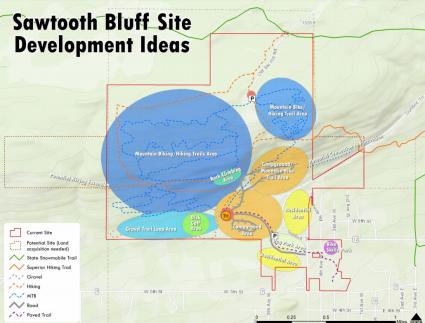 The county’s Parks and Trails Commission completed a master plan for the Sawtooth Bluffs area on the ridge above the city of Grand Marais in August 2018. That plan included the proposal to create a fenced dog park on a 2.5-acre section of the 640-acre site.

No action has been taken toward developing this area and in August 2020, representatives of Go Dog North Shore, a nonprofit formed to promote active human and dog relationships in our area, asked the city council to revive the plan for a dog park.

At that meeting, Go Dog North Shore wrote that if they received an endorsement from the City of Grand Marais, they could work with the county to acquire the space and they could seek funding for the development of an appropriate area for a dog park.
The city council agreed that discussion needed to start about the dog park and the Sawtooth Bluff area, but did not give a formal endorsement of the Go Dog North Shore proposal.

The matter has not yet been formally added to a city council agenda, but there have been several other requests from Go Dog North Shore, during city council public comment meetings or to messages to the mayor and city councilors.

At the latest city council meeting, on March 10, City Administrator Mike Roth acknowledged the Sawtooth Bluff questions. Roth explained that the Sawtooth Master Plan seems to have come to a halt because of county restructuring.

Roth reported on a meeting with new County Administrator Jame Joerke, who is just getting up to speed on the project after being hired in September 2020. Roth noted that the city council may have to take action if it wants any of the Sawtooth Bluff plans to move forward. He asked the city council to decide if they want to make this a top priority for the city.

Administrator Roth said it does not seem feasible for a nonprofit to take on the task of beginning development at the Sawtooth Bluff site, as there is still much work to be done. There is no driveway or parking at the site and wetland delineation has not been done.

Roth also noted that there is another animal-related project under consideration, an animal shelter. It has been proposed that a shelter could be constructed on a Cedar Grove Business Park Lot. However, Roth said neither the Arrowhead Animal Advocates, which is partially funding the new shelter building, nor Go Dog North Shore, want a combined area. The interaction between shelter dogs and family pets could be problematic.

Roth said even though a shared site is not ideal, that may end up being the case. But that too, has hurdles to meet before any sort of construction can begin. No steps have been taken for the city to acquire a Cedar Grove Business Park lot. And if the city does so, a stormwater management plan would have to be completed before any construction could be done.

City councilors agreed to hold another priority-setting meeting to see where the dog park and animal shelter should fall on the city’s list of project. There may be challenges to that as well, due to the COVID pandemic meeting precautions. Roth said there may be individual exercises that could take place leading up to a larger planning meeting.

Setting a schedule for city priority planning will be on the agenda for a city council meeting in April.