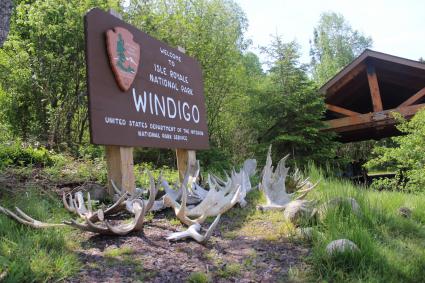 Script starts to flip on wolves and moose at Isle Royale

In recent years, common sentiments shared between wildlife researchers and visitors to Isle Royale National Park focused on too many moose and not enough wolves.

According to a recent report from researchers working on the island, things on that front are starting to change.

And that’s a hopeful sign for efforts to rebuild a gray wolf population that had nearly died out.

Crews brought wolves from Minnesota, Michigan’s Upper Peninsula, and the Canadian province of Ontario to the Lake Superior park several years ago.

It’s unknown how many are there now because the coronavirus pandemic forced the cancelation of the annual winter census.

But researchers with Michigan Technological University say remote cameras have detected a number of pups.

Christine Goepfert is the Midwest associate director for the National Parks Conservation Association. In a statement sent to WTIP July 12, she points out that researchers have studied wolves and moose at Isle Royale National Park for more than six decades.

“This year, their research provided a picture that’s worth a thousand words,” Goepfert said. “Snapshots of four wolf pups born on the island demonstrate that Isle Royale’s wolves are breeding and thriving. This is a story of hope for the park ecosystem, one that scientists and conservation advocates have worked so hard to see realized.”

Meanwhile, the park’s overgrown moose population appears to be dropping. Photos from 2021 show some of the island’s moose are extremely thin. One researcher working on the island noted that the moose are literally “starving to death.”