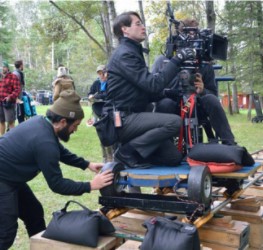 The Upper Midwest Film Office is an interesting organization, working to bring movie and TV productions to the midwest–and to the North Shore. There is currently a full-length movie being filmed in Two Harbors, Silver Bay and Grand Marais, titled Abroad.

The director is a Saint Paul native, Maximilian Selim. He and his crew are filming and producing the movie which is a psychological thriller.

Riki McManus, the director at the Upper Midwest Film Office, spoke with WTIP Community Radio about why filming on the North Shore is good for the economy. She said it puts everyone to work, from film techs and actors to hardware and clothing stores.

The Upper Midwest Film Office was instrumental in getting Abroad going, acting as a sort of community concierge for the production.

A second film is also currently being shot in the Northland called The Hand That Feeds.

UMFO provides a directory of people interested in working in the film industry, from film and sound crews to set building and lighting. There are also opportunities to work on films in graphics arts, still photography, food service, transportation, and much more. Anyone who would like to learn more or would like to be entered in the Upper Midwest Film Office directory can learn more on their website.

UFMO also offers a wide variety of workshops. Information on courses such as Set Etiquette, Hair, Makeup & Costume, Production Assistant, and more can also be found on the UFMO website.