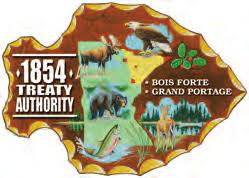 Coinciding with the international climate talks in Scotland next month, WTIP is hosting a community conversation on Thursday, Nov. 4, with climate researchers and scientists from the 1854 Treaty Authority.

The 1854 Treaty Authority is governed by the Bois Forte and Grand Portage bands. It operates with the mandate of preserving and protecting off-reservation treaty resources across more than 5 million acres covering present day northeastern Minnesota.

The role of Indigenous communities in this global climate conference is crucial as these communities are often disproportionately impacted by climate change and are at the front lines of adapting to changes and building community resilience, according to officials with the 1854 Treaty Authority.

WTIP and the 1854 Treaty Authority are inviting all community members and those interested in environmental issues in northeastern Minnesota to be involved in these conversations. Send any comments or questions you have about climate change and how it is and could impact or change the future of this area.

Send your comments or questions to joe@wtip.org and they will be shared with researchers and scientists working for the 1854 Treaty Authority.

The special community conversation will air at noon and 7 p.m. Thursday, Nov. 4.

The program occurs as Indigenous groups and other environmental activists marched to the U.S. Capitol in Washington D.C. Oct. 15 following a weeklong protest demanding that Congress and the Biden administration stop new fossil fuel projects and act with greater urgency on climate change, the Associated Press reports.

Nearly 80 people were arrested on the fifth day of the “People vs. Fossil Fuels” protest. That brings the total arrested during the week to more than 600, organizers said.

Under a banner declaring “We did not vote for fossil fuels,” activists pressed President Joe Biden to stop approving new pipelines and other fossil fuel projects and declare a climate emergency. Demonstrators urged members of Congress to “listen to the people” who sent them to Washington and take urgent action to phase out fossil fuels that contribute to global warming.

Speakers said Biden was not following through on his promises to act on climate change.

“It’s ridiculous. He promised, just like they’ve done in the past, ‘We’ll talk about it, we’ll bring it to the table.’ Where’s our seat?” asked Isabelle Knife, 22, a member of the Yankton Sioux tribe of South Dakota.

“We haven’t had a seat. We haven’t been heard,” Knife said. “It takes youth to be on the frontlines. It takes us to put our bodies on the line.”

White House press secretary Jen Psaki said the administration was “listening to advocates and people who have been elevating the issue of climate for decades.”

She encouraged activists and anyone who supports action on climate change to look at Biden’s proposals in a bipartisan infrastructure bill and a larger Democratic-only plan to address social and environmental issues.

Tribes in Minnesota continue to share input and opinions on some of the most controversial environmental issues in the Lake Superior and Boundary Waters region, including the Enbridge Line 3 oil pipeline, copper-nickel mining near the edge of the BWCA and recent changes to water rules and regulation in Minnesota. More recently, some Chippewa tribes in Minnesota, including the Grand Portage Band, have shared opinions on the proposed expansion of Lutsen Mountains in Cook County, according to Forest Service officials.

The Capitol protest followed a sit-in last week at the Interior Department in downtown Washington. Demonstrators clashed with police as they challenged pipelines and other fossil fuel projects and called for declaration of a climate emergency. More than 50 people were arrested.

Interior Secretary Deb Haaland, the first Native American Cabinet member, was traveling and was not in the building during the protest.

The protest was part of “a historic surge of Indigenous resistance” in the nation’s capital that started on Oct. 11, Indigenous Peoples’ Day, outside the White House, said Jennifer Falcon, a spokeswoman for the Indigenous Environmental Network, a part of the coalition that organized the protest. More than 100 people were arrested as protesters linked arms and sat along the White House fence line to urge faster action to combat climate change.

Protesters also climbed a flagpole outside the Army Corps of Engineers office, demanding a stop to Line 3, an oil pipeline upgrade that was recently completed in Minnesota. The pipeline will bring tar sands oil from Canada to Wisconsin.

“In November we made a choice to vote for a president who said he would be the climate president, who said he would stop pipelines, and right now we are seeing a betrayal from the White House and Congress,” said Zanagee Artis, co-executive director of Zero Hour, a youth-led climate justice organization.

“We need climate action now. We are out of time to address this issue,” Artis said, adding that he campaigned for Biden and called voters on his behalf.

WTIP’s Joe Friedrichs spoke with Hilarie Sorensen, a climate biologist for the 1854 Treaty Authority, to preview the upcoming community conversation and learn more about climate change impacts on the local, regional and global level. Audio below.