WunderBar campers, cabin, and building contents up for auction

The WunderBar Eatery and Glampground opened in 2017 with hopes to revitalize the building that was once the Harbor Light Supper Club. However, in August 2019, the owners of the Wunderbar, Chris and Teri Downing, doing business as Heart Rock LLC, were in bankruptcy court. Financial troubles plagued the business which brought the concept of “glamping” to the North Shore, offering stays in several revamped campers and elegant Lotus Belle tents.

The glamping model was well received and WunderBar received a great deal of media attention around the region. The funky atmosphere and frequent live music nights made the Wunderbar a popular destination for many locals. However, according to Chris and Teri Downing, keeping the WunderBar open year-round was a struggle.

WTIP spoke with the Downings in August 2019, who said Heart Rock LLC was in the process of restructuring. A GoFundMe site was established and the Downings raised approximately $50,000 to keep the eatery afloat. The couple thanked the community for its support at that time. Listen to that interview below.

With the onset of the COVID-19 pandemic, the WunderBar had to shut down operations, although Chef Chris Callendar continued to offer meals, free of charge and/or by donation to the public until the WunderBar announced it was closing its doors permanently in June 2020.

The final chapter for the WunderBar is taking place this week, with an auction of the contents of the building and the campers and cabin in the yard. Auction Masters & Appraisals is conducting an online auction now through Tuesday, September 16.

On the auction list is a 1957 Mallard camper trailer, two 1963 Winnebago camper trailers, a log cabin once owned by Minnesota Governor Jacob Preus, picnic tables, a couple of televisions, a professional smoker with propane tank, an expresso machine, seasonal décor and much more.

The auction catalog also includes some of the items that were in the bar when it was Harbor Light Supper Club, owned by Doug and Sandi Rude, such as a jukebox, pool table and furniture. WTIP contacted Auction Masters to confirm that those items were included in the sale. Greg Christian of Auction Masters said the Rudes no longer own any of the items on the list.

The Rudes still own the Harbor Light building, which once had a purchase offer from Dollar General. That sale fell through in 2016 after public opposition over the proposed discount franchise and the city of Grand Marais’s issuance of a moratorium on construction of any commercial retail development over 5,000 square feet along the highway on each end of town. The moratorium passed in February 2016 remained in effect for one year.

So for now, the future of the Harbor Light Supper Club building is once again uncertain. 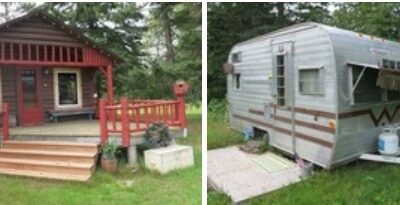