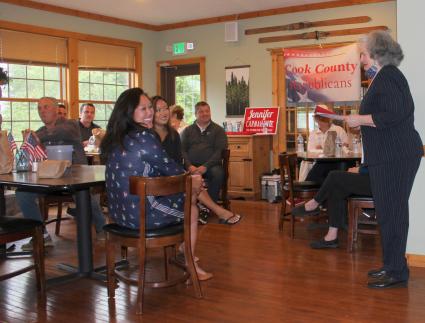 Despite an ongoing health pandemic, Gov. Tim Walz is abusing his power and showing Minnesotans what communism looks like in 2020, according to Jennifer Carnahan, the chair of the Minnesota Republican Party.

“This is communism,” Carnahan said near the shores of Devil Track Lake during a cold, rainy summer afternoon in Cook County.

About 20 people attended a local meeting of the Minnesota Republican Party July 21 that was held as a luncheon at Skyport Lodge. Other than two local news reporters, essentially nobody in attendance wore a mask during the 90-minute event that was held in a small dining area. A collection of older local residents sat nearly shoulder to shoulder at several tables situated in a U-shape in the small room throughout the entire event. Few, if any, social distancing measures were followed, and handshakes between local residents and people from outside the county were plentiful prior to the start of the event.

The gathering of local and some state members of the GOP took place on the same day Cook County reported its second confirmed COVID-19 case in a local resident. As August nears, the virus continues its march up the North Shore, with Lake County’s total case count climbing to 14 on Tuesday and St. Louis County’s numbers climbing in recent weeks faster than at any other time during the pandemic.

Cook County GOP Chair Mary Petz occasionally donned a mask during the event, including after she started to repeatedly cough at one point during the meeting. Indeed, it was Petz who suggested one week prior that those in attendance should wear masks. In an email dated July 14, Petz writes: “We ask that you wear masks, and there will be seating whereby we can have some spacing. We are following the Cook County Emergency Operation Center’s recommendations.”

In a statement sent to WTIP July 22, Cook County Public Health Supervisor Grace Grinager addressed the absence of masks at the GOP event at Skyport.

“Throughout the pandemic, it remains a basic freedom of our country to participate in political processes,” Grinager said. “The EOC encourages individuals to follow basic public health precautions in all social settings. These include social distancing and wearing masks in areas, especially indoor areas, where it is difficult to socially distance. These practices help us keep one another safe and healthy.”

Carnahan, a resident of Blue Earth, who is married to U.S. Congressman Jim Hagedorn, is busy traveling the state on the campaign trail as the November election climbs sharper into focus. During an open format Q & A toward the end of the meeting, WTIP asked Carnahan in front of the group why she chose not to wear a mask during the event.

“I think wearing masks are a personal choice for people and they can make decisions based on how they feel,” she said. “As they long as there are safe practices and people are healthy, you know, it’s a personal decision.”

Carnahan, surrounded by others who were also not wearing a mask, made the statement in a public indoor setting one day before Walz was expected to make an announcement on a statewide mask mandate. Before WTIP could ask a follow-up question about wearing masks in public as the state continues to see its case count grow, a member of the audience started to talk about “traveling outside the state” and the fact that at restaurants “you can take (your mask) off at a table” and her belief that measure “is effective too.”

The event, which Carnahan’s team labeled as “a special MN GOP update,” also featured a local candidate running for the District 4 seat on the Cook County Board of Commissioners, Dean Berglund. Berglund spoke openly about his support of the Trump administration and linked it back to his run for county office.

“Everybody I talk to was like ‘you’re a Republican, you’re a Trumper’,” Berglund said. “Yep, not apologizing for that.”

Also featured during the event Tuesday was Thomas Manninen, a resident of Littlefork who is challenging incumbent District 3A Rep. Rob Ecklund in the November election. Manninen spoke briefly to the group, stating that his campaign is focused on ‘bringing back the North’ and his desire to shift a focus on regional politics away from the Twin Cities.

Meanwhile, it was the lack of wearing masks and disregard for physical distancing among those in attendance at the GOP-sponsored event that stood out as peculiar given recommendations from local, state and federal healthcare officials. Carnahan’s statements on wearing a mask as a “personal choice” came one day after President Trump declared mask-wearing as “patriotic.” He followed that statement one day later – mere hours after the GOP event at Skyport concluded – by saying of masks that people should wear them if they’re in a group setting.

“If you’re close to each other, if you’re in a group, I would put it on when I’m in a group,” Trump said, according to a July 21 article in the New York Times.

“Get a mask,” Trump said Tuesday, according to the Times. “Whether you like the mask or not, they have an impact. They will have an effect and we need everything we can get.”