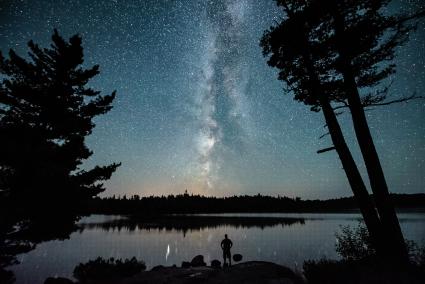 It was a good week for the Boundary Waters.

Following a busy Labor Day weekend that brought significant crowds to the most visited wilderness area in the nation, the Boundary Waters Canoe Area Wilderness is now a certified International Dark Sky Sanctuary.

The designation makes the BWCA the first federally designated wilderness setting to achieve the official recognition. It is also the first location in Minnesota to receive the dark sky nod of achievement.

“We are excited to receive the Dark Skies Sanctuary designation for the BWCA and are committed to preserving dark sky opportunities for future generations,” said Connie Cummins, Superior National Forest supervisor.

The International Dark Sky Association is a non-profit organization founded in 1988 with the goal of reducing light pollution and protecting night skies for the present and into the future.

A Dark Sky Sanctuary is “public or private land that has an exceptional or distinguished quality of starry nights and a nocturnal environment that is protected for its scientific, natural, or educational value, its cultural heritage and/or public enjoyment.”

According to a 2016 National Geographic article, 80 percent of Americans cannot view the Milky Way from the outside area near their homes due to light pollution.

Among the people who likely can’t see the Milky Way on a consistent basis is Julia Louis-Dreyfus. The acclaimed actress visited the BWCA in 2019 and is apparently a huge fan of the Gunflint Trail and surrounding wilderness. So much so, in fact, the former Seinfeld and Veep star is scheduled to participate in an online event with former Minnesota Sen. Al Franken on Oct. 8 to raise awareness of the need to protect the BWCA. The event is being organized by the Boundary Waters Action Fund, the political arm of the Save the Boundary Waters Campaign.

Ann Schwaller is the BWCA program manager for the Superior National Forest. She spoke with WTIP’s Joe Friedrichs about the dark skies over the Boundary Waters.