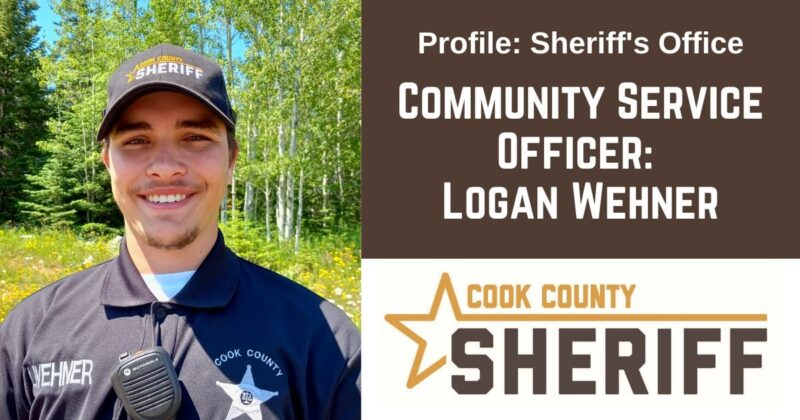 Cook County welcomed a new face to the sheriff’s department this summer.

A Community Service Officer (CSO), Logan Wehner, was brought on board as a trial run internship program with the Cook County Sheriff’s Department.

Wehner is currently pursuing a career in law enforcement at Winona State University. The CSO opportunity was developed to fit a contracted seasonal position with the city of Grand Marais that the sheriff’s department had difficulty securing.

A CSO is responsible for various non-licensed functions such as parking violation tickets, dog complaints, minor traffic violations, or public events. Wehner described the CSO position as a stepping stone as he pursues his degree. A CSO does not carry a weapon or have the authority to arrest anyone.

Cook County Sheriff Pat Eliasen told WTIP that he was happy with the internship program and that Wehner has been doing a great job. While Eliasen said there are still some kinks to work out with the program, overall, it has been a big success.

He said, “I couldn’t be happier with the way it’s going right now. And I think a lot of people would feel the same about that.”

Unfortunately, Wehner finishes his internship and heads back to Winona, Minn., before the upcoming Fisherman’s Picnic.

Wehner told WTIP that he had enjoyed his time in Cook County so far. He said, “It’s beautiful up here, and it keeps you busy.” He added, “Everyone’s been great. There has not been a day that I don’t want to work.”

Eliasen said that the sheriff’s department is interested in offering the internship again next summer for an aspiring law enforcement student. He also noted he would try his best to tweak the contract dates so the next CSO doesn’t have to miss out on Fisherman’s.

WTIP’s Kalli Hawkins spoke with CSO Logan Wehner and Cook County Sheriff Pat Eliasen to learn more about the law enforcement internship. Audio from the interview is below.