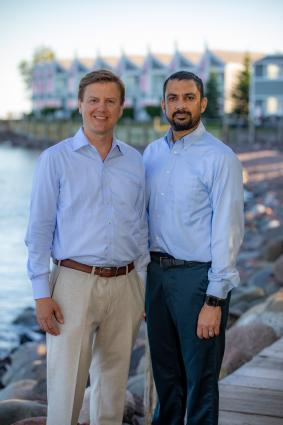 Getting to know the new co-owner of Bluefin Bay Resorts

In early July an announcement was made regarding the iconic West End resort, Bluefin Bay.
The original Tofte resort, as well as Temperance Landing, and Surfside on Lake Superior had been sold to a former Silver Bay resident, Joe Swanson, and his business partner, Pipasu Soni.

Bluefin Bay founder Dennis Rysdahl will stay on at the resort for a while in an advisory capacity, with plans to retire in 2021-2022. Rysdahl has been operating what is now known as the Bluefin Bay Family of Resorts for 36 years.

During Rysdahl’s tenure, the resort properties grew from the first condos at Bluefin Bay in 1984 to Temperance Landing in 2006, and Surfside on Lake Superior in 2008. Combined, the three lakeside resorts have 229 bedrooms and can host up to 704 guests across a collection of guest rooms, suites, condos, and townhomes.

Also included in the sale were the resort’s three restaurants: The Bluefin Grille, Coho Café, and Bakery, Waves of Superior Café, as well as Waves of Superior Spa. In addition, the resort properties include indoor and outdoor pools, saunas, fitness centers, tennis courts, ice rinks, children’s play areas, and wedding and event venues.

Rysdahl sought to find a buyer who he felt would carry on the Bluefin Bay tradition and who he believed would work well with the Bluefin Bay staff, owner partners, and the local community.

Rysdahl said, “I knew when I saw Joe Swanson’s name on the list of potential buyers that he was one of us. He shares a history here, as well as our core values and commitment to the community.”

Swanson, who is now a 401(k) and business advisor in the Twin Cities, was familiar to Rysdahl as he worked at Bluefin Bay during high school and college, learning the ropes in housekeeping, dining, and maintenance positions.

Rysdahl added that Swanson’s partner, Pipasu Soni’s resume was also exceptional. Soni is the CFO of the coach and transportation company, New Flyer.

Rysdahl said, “I’m confident we’ve selected an ownership team that is deeply committed to continuing the Bluefin Bay tradition of creating memorable vacation experiences for guests for years to come.”

WTIP’s Rhonda Silence spoke with Joe Swanson about his ties to the North Shore, about his interesting business partner, and about becoming the co-owner of the Bluefin Bay Family of Resorts.