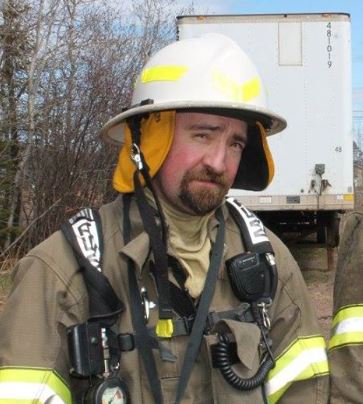 A fire broke out in downtown Grand Marais at approximately 1:30 p.m. today, April 13. Flames were first seen at the Crooked Spoon Café on Wisconsin Street and when the Grand Marais Fire Department arrived on scene, the upper level of the café was fully engulfed in flames. Visit the WTIP Facebook page for photos and video of the fire scene.

Maple Hill, Colvill and Lutsen Fire Departments were paged for mutual aid as high winds fueled the fire, driving it into the adjacent buildings—Picnic & Pine to the west and White Pine North to the east. Despite the efforts of the four fire departments with multiple fire engines, the fire quickly destroyed those buildings as well.

Firefighters focused on keeping the fire from spreading to Sven & Ole’s Pizza, just a short alley away from White Pine North.

Shortly after 4 p.m. the Grand Marais Fire Department called for assistance from someone with an excavator to help knock down the burnt walls of the buildings. Cook County Highway Department responded and a large excavator knocked down walls and moved the piles of debris around as firefighters continued to saturate the burning remains.

At about 5 p.m., the fire was deemed under control and firefighters entered the “mop-up” phase, continuing to drench the hot materials. Firefighters will remain on scene until it is certain the fire is out. However, Grand Marais Fire Chief Ben Silence told residents, the debris may smolder and smoke will linger through the night. He said that is not a cause for alarm; the fire department will not leave the scene until they are certain it is out.

No injuries have been reported, either at the start of the fire, or of any personnel fighting the fire.

The cause of the fire is unknown at this time. The State Fire Marshal has arrived at the scene and an investigation will take place.
As so much water has been needed throughout the day to fight the fire, the City of Grand Marais is asking Grand Marais Public Utilities Commission customers to refrain from using water as much as possible until 10 p.m. tonight.

WTIP had a quick conversation with Grand Marais Fire Chief Ben Silence as the fire was being mopped up.