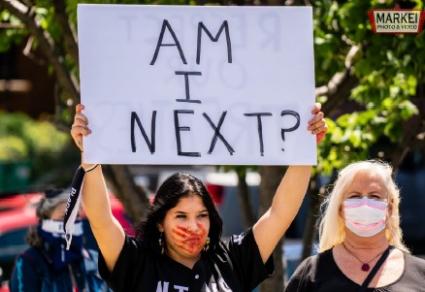 One of those tribal representatives is Jacki Kozlowski, who is the Human Services Director for the Grand Portage Band of Lake Superior Chippewa. Kozlowski is also the past Domestic Violence Advocate in Grand Portage.

Kozlowski was on hand for the very beginning of the work at the Minnesota Humanities Center in September 2019, when Governor Tim Walz and Lt. Governor Peggy Flanagan signed the legislation establishing the task force.

Kozlowski and the group members heard from law enforcement, representatives of the courts, the Minnesota coroner’s office, from Indigenous anti-violence groups such as Mending the Sacred Hoop. And perhaps most painful, the task force heard stories from survivors and their families.

The task force gathered an impressive amount of data, focused on the following information:
Indigenous women, girls, and two-spirit people are far more likely to experience violence, be murdered, or go missing compared to other demographic groups in Minnesota. While Indigenous people make up just 1% of the state’s population, 9% of all murdered girls and women in Minnesota from 2010-2019 were American Indian

Along with higher rates of homicide, American Indian women and girls make up about 15% of female missing persons cases every month despite being less than 1% of the state’s population.

WTIP Community Radio spoke with Jacki Kozlowski, asking her if she was aware of those disturbing statistics before she joined the task force. Kozlowski said yes, she had heard that in her previous work as a domestic violence advocate. But instead of deterring her from what would undoubtedly be an often painful process, it made her even more determined to do her part.

In a statement on the release of the report, Lt. Governor Flanagan said, “For far too long, Native women have been, at best, invisible, and at worst, disposable. As Native women and girls experienced violence, went missing, or were murdered at disproportionate rates, too often, the cases and root causes went unexamined.”

Asked what will happen next, Kozlowski said she hopes the governor’s office and the legislature will take a close look at the task force recommendations and take action on them; to fulfill the goal of the Missing and Murdered Indigenous Women Task Force. Kozlowski emphatically explains that the goal is to see that not one more woman, not one more girl, goes missing or is murdered.