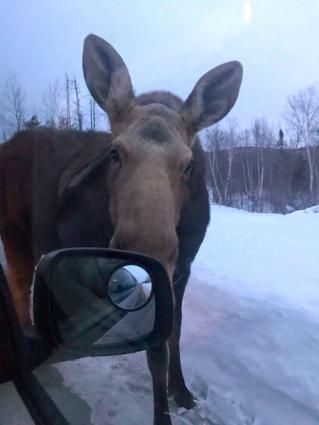 For the ninth year in a row, Minnesota’s moose population remains relatively stable, but reproductive success – one of the factors that has the greatest impact on moose survival over time – remains low.

Based on counts from this winter, the Minnesota Department of Natural Resources estimates the moose population to be 3,150 animals (between a range of 2,400 and 4,320). Due to the variance in this type of annual population estimate, this year’s estimate does not suggest a decline from last year’s estimate of 4,180 moose. The survey provides an estimate rather than documenting the precise number of moose because biologists cannot see or count every moose across the 6,000-square mile survey area. They survey a portion of the moose range every year to generate the estimate.

While the recent population stability is good news, DNR researchers point out that Minnesota moose remain at risk over the long term. The moose population has declined from an estimated 8,840 animals in 2006.

Low reproductive success and continued deaths from brainworm and other diseases make it difficult for Minnesota’s moose population to recover.

WTIP’s Joe Friedrichs spoke with Glenn DelGiudice, the DNR’s moose and deer project leader, about the moose population in Minnesota and the 2020 population estimates.

To view more details on the 2020 DNR moose count and research involved with the project, click here.