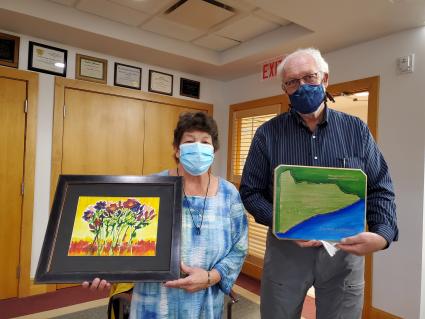 The September 7 meeting of the Cook County/Grand Marais Economic Development Authority (EDA) started with a transition—and cupcakes.
As new EDA Executive Director Beth Drost officially opened her first board meeting, there was a pause for refreshments and recognition of retiring EDA Executive Director Mary Somnis.

EDA Board members thanked Somnis for her five years of service, noting that under her tenure much had been accomplished. But, perhaps more important, said Board Member Scott Harrison, the reputation of the EDA had been improved. Harrison said before Somnis became director the EDA had “a black eye,” but is now a respected entity in the community.

Board Member Bev Green agreed, adding that she would not have applied to serve on the EDA board if it had not been for Somnis’ leadership.

EDA President Howard Hedstrom said it has been an honor to work with Somnis and presented two gifts. One is a cheerful floral watercolor, painted by Bonnie Gay Hedstrom. Board members said the gift was of flowers that wouldn’t die. Hedstrom also presented Somnis with a plaque crafted from the wood from the elms in downtown Grand Marais. The plaque, with an etching of Minnesota’s Arrowhead, said “With appreciation for your committed & dedicated service” and “You made a difference.”

Somnis thanked the board and said she believes they are in a good position as Drost takes the lead. She said she was glad to follow the Girl Scout’s rule of “leaving the campsite a better place.”

Drost also thanked Somnis, noting that she feels well-positioned because of the assistance given so far. And, Drost noted, Somnis will continue to share her knowledge for a few more weeks—and then has promised to be just a phone call away.

After refreshments, the EDA got down to business, talking about an upcoming Cedar Grove Business Park lot sale to Voyageur Brewing Company and a request for Business Development funding, and more.

WTIP’s Rhonda Silence spoke with new Executive Director Beth Drost about all of that. Here’s their conversation. 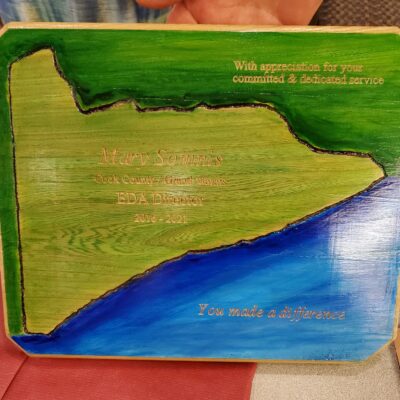 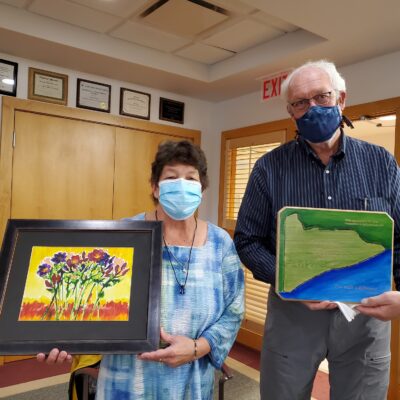