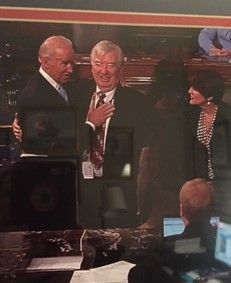 Jerry Linnell, a 1960 graduate of Cook County High School, went on to a career in court reporting, eventually becoming a congressional reporter at the U.S. Capitol.

Linnell worked as a reporter on the Senate floor from 1980 to 1999. He became the chief U.S. Senate reporter then and continued to serve until retirement in 2014.

WTIP reached out to Jerry Linnell to hear some of his memories of working at the Capitol, as well as his thoughts on the disturbing and historic activities on Wednesday, January 6, the storming of the U.S. Capitol.