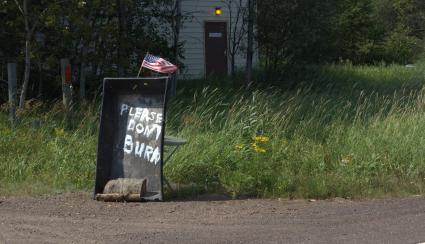 WTIP shares report from Isabella and edge of the Greenwood Fire

The Greenwood Fire near Isabella was approximately 4,000 acres and actively burning Thursday morning, according to the U.S. Forest Service. A portion of Highway 1 remains closed today near Isabella to help fight the fire and keep people out of the suppression zone.

The Forest Service announced Thursday that the Greenwood Fire started by a lightning strike.

The Greenwood Fire is one of many burning in the WTIP listening area. There are also fires burning in the BWCA near Sawbill Lake, and numerous wildfires in Ontario led to the closure of Quetico Provincial Park this week.

WTIP shared daily, and in most cases, hourly updates on the Greenwood Fire this week. However, the news team at WTIP wanted to learn more about the scene along Highway 1 near Finland and Isabella as the fire continues to burn. News Director Joe Friedrichs traveled to Isabella and Finland Aug. 18 and shares a report in the audio below. Interviews from the Forest Service incident command post at the Isabella Community Center include Superior National Forest Supervisor Connie Cummins and Public Affairs Specialist Joanna Gilkeson.