While noting what he describes as “opposing voice(s)” who cast false accusations and a misrepresentation of his words, former county commissioner and local newspaper columnist Garry Gamble will no longer be a fixture in the Cook County News-Herald.

Gamble’s last column will appear in the Sept. 25 edition of the News-Herald.

To open his final column, Gamble writes: “This will be the last column I am indulged to pen for the Cook County News Herald. The time has come, not by volition but by submission, to quiet the opposing voice under carefully cast malignment.”

News-Herald Publisher Jeremy Gulban sent a statement to WTIP Sept. 24 confirming the end of Gamble’s columns in the local newspaper.

“It’s no secret that a lot of people have objected to many of Garry’s columns over the years,” Gulban said. “Garry and (News-Herald Editor Brian Larsen) decided that it was just the right time to end the run. We plan to keep the focus on local topics going forward.”

Gamble’s columns started soon after he lost his reelection bid for the District 2 seat on the Cook County Board of Commissioners. Gamble lost the 2016 election to Myron Bursheim.

Published weekly under the title “Do You Know?,” Gamble often used the column for a platform to discuss issues ranging from taxes and local government to current events.

Gamble was not without his critics. It was, in fact, common for letters to the editor from community members harshly criticizing his work to appear next to Gamble’s column in the local newspaper.

And while critics of the weekly commentary and Gamble’s writing were perhaps more visible in the local newspaper and in casual community conversations, there were supporters of Gamble’s work. A grassroots group formed in 2017 under the name “Concerned Citizens for an Affordable Cook County.” The genesis of the unofficial organization was tied to double digit levy increases during the tenure of former Cook County Administrator Jeff Cadwell. Soon after the group formed, Gamble was instrumental in putting together a tax survey that was sent to most Cook County property taxpayers. The results of the survey were published in the News-Herald.

Throughout the years Gamble published columns that ranged from his skepticism on climate change to the COVID-19 pandemic. Gamble made occasional derogatory references to journalists, writing in October 2020 that “journalists see themselves as arbitrators, delegated to sanction and support what is untrue and censor and suppress what is in fact true.”

During the past 18 months, Gamble did not shy away from the COVID-19 pandemic in his writing. Despite the recommendations of local healthcare officials, including Cook County Public Health Supervisor Grace Grinager, Gamble did not support guidance on the COVID vaccine. In April 2021, Gamble writes: “What is being touted as a vaccination … is not a vaccine. It’s gene therapy.”

Also included in Gamble’s final column are multiple references to his late daughter, Jessa Roquet. A Minnesota musician, Roquet died of cancer at the age of 42 in June.

Gamble writes in the Sept. 25 edition of the News-Herald: “As our daughter, Jessa, expressed, ‘there are 360 degrees to a story, and I am the kind to spin myself silly to see ALL the views.’” 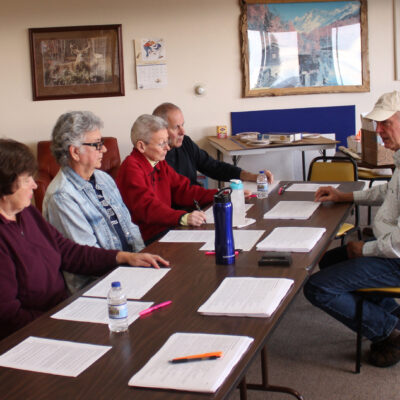 Garry Gamble (pictured right) works with others to sort through a 2017 tax survey. Photo by Joe Friedrichs