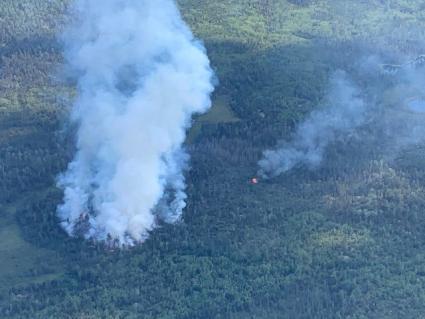 Smoke from wildfires in Canada and in the Boundary Waters Canoe Area Wilderness have infiltrated the region’s skies this summer.

Fires are now burning in both Quetico Provincial Park and the BWCA at this time. There are closures inside each location due to the active fires. A campfire ban remains in place inside the BWCA and at dispersed campsites across Superior National Forest. The ban was first enacted July 9. It will remain in effect until the Forest Service lifts the ban as dry conditions continue to plague the region.

According to MPCA’s staff meteorologists, smoke from wildfires contains a variety of pollutants that are problematic for human health. Smoke contains carbon dioxide, water vapor, carbon monoxide, particles, hydrocarbons, other organic chemicals, and nitrogen oxides. The pollutant that’s the most concern is fine particles, as those are the ones that seem to do the most damage to the lungs and the heart, according to the MPCA.

Taraldsen spoke with WTIP’s Joe Friedrichs about the current level of wildfire smoke in Minnesota and what it means for those coming to the North Shore and the Boundary Waters region to engage in various forms of outdoor recreation. The audio shared below is their conversation from July 15.